I was unable to make the previous session due to ill health, but Meegosh got back into things this week... 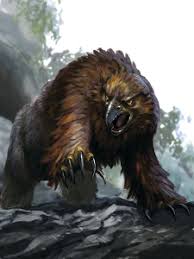 I was not feeling myself for the last few days, and have missed many a twist and turn in the tale due to the effects of amnesia (as a player I could not attend the session so was faded into the background). However, I finally snapped out of my stupor inside a cavern with my friends talking to a mage, who was doing his best to appear friendly.

After a short discussion with the mad mage, his pet owlbear, Cuddles, turned up at the cavern entrance and proceeded to hem us in. The mage’s mood turned and he somehow managed to cast a mass suggestion on the party without my being able to respond. We all fell under his spell except for Millie who proceeded to attack Cuddles which enraged the mage further although he pleaded for calm. Anyway, long story short, Millie and Gur made short work of Cuddles whilst the rest of us took our frustration out on the mage when we realised we had been duped.

After our adversaries had been despatched, we searched the area for any treasure and clues we could find and were rewarded with four of the Crystal leaves we were tasked to find to get the dimension jumping device back in Pureforge to work, a Wand of Fireballs and a cryptic map. We each took a turn at deciphering the map, and I pocketed the wand as I thought I would be the best qualified to use such an arcane device.

We decided to follow up on the map in the hope that we might find more clues and perhaps a bit more treasure and set off straight away. We travelled in a north-westerly direction for a couple of days and finally arrived at a small, long abandoned village with a well, as depicted on the map, in the centre. Millie led the way, rather more quickly than she hoped, down the well shaft which opened out into a small cavern at the bottom.

We all followed down the rope after her and explored the large cavern we found at the end of a short tunnel. There were four side caverns and a main one with an arch containing four bowls before it. Malfeseus and I managed to decipher three of the four sets of runes above the smaller cavern entrances and upon the main arch above the bowls; Finger of Death, Negative Energy, Disintegrate and something else.

Each of the side caverns had a Glyph of Warding as per the list we deciphered set above them. By various means we set off each glyph and investigated the contents of each room in turn. They all had a sarcophagus within them that upon opening revealed a gaseous form that corporealised into the form of a mummy. Each got progressively harder to kill and more able to control our fears. After each mummy was dispatched, it returned to gaseous form and the spirit fled screaming to one of the bowls around the arch at the entrance to the main sepulchre.

However, after fighting three tough opponents the rest of the party decided that they needed to rest up whilst I explored the arch and bowls.