The Valkyries - choosers of the slain

It seems like real life has got in the way of my hobbies yet again. Just as I started to get on a roll with my painting life comes along and kicks me in the teeth.

My father passed away suddenly on 16th May 2016. He was not very well following a heart bypass operation a few years before but seemed to be making a great recovery recently. Then, unbeknownst to me, he was taken to hospital the week before he died as he suffered from shortage of breath.

In the early hours of the morning following his return home a week later, he was found outside his house by one of his neighbours surrounded by crows. The neighbour shooed them away and called the authorities to take care of my father's body. Now, although I am not at all religious, I would like to see this as the Valkyries (myth suggests that the Vikings saw crows and ravens, constant attendees at the aftermath of battles, as Odin's handmaidens) coming to choose an old warrior (my father was in the Royal Engineers) to party away eternity in the halls of Valhalla. It is a comforting thought for me. 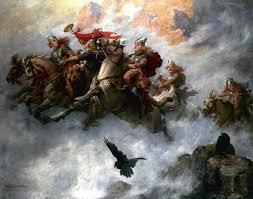 The Ride of the Valkyries by William T. Maud


Following this bad news and the subsequent funeral preparations, house clearing, legal matters etc., I got some good news in the form of a new contract role. It took a good while to get started and go through the onboarding process, but at least I am now back in work, albeit only for a few months again (one of the pitfalls of being a contractor). To add to this, our family holiday arrived to take my mind off of all the goings on.

All of this has had an impact on my pastimes, but now that I am settling back into everyday life I am hoping that I can find the time again for my hobbies. I will have to dig out all of the painting paraphernalia and miniatures that are half-done and set out a plan to get some units completed in short time so I can maybe get some playing done by the close of the year. I also want to get back to (re-)reading my old comics (I still have the last 14 years worth of 2000AD and Judge Dredd Megazine to get through! as well as several dozen of the latest Dark Horse Conan run) and putting my efforts into training to improve my running times again.