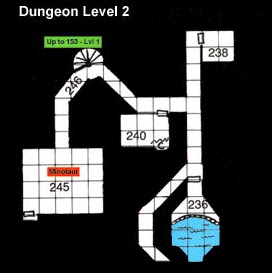 In the dark confines of the western corridor Cormac and Theoderic continued their fight with the bull-headed ogre. The singing of the heroes’ swords was more than a match for the thudding of the minotaur’s axe and horns however. As soon as the monster was brought down the last two Temple guards made their escape; how could they prevail against such heroics when a huge beast from the netherworlds could not?  Vox, with the Polymorph potion still coursing through his veins, changed again into a bird and gave chase to the two retreating guards, whilst the two fighters charged up the corridor and hacked down the still Held Temple guard leader. One of the guards sprinted for the safety of the level above via the spiral stairwell whilst the other guard tried to retreat towards the deeper confines of the dungeon. Vox caught him quickly in his guise as a bird and then, not being able to think of anything else, turned himself into a small horse and landed on the fleeing guard – crushing him to death.

As he was now cut-off from the rest of the combat, Vox decided to utilise the short span of quiet time to explore the corridor and subsequent large chamber he now found himself in. The huge chamber was most likely used as a kind of reception hall in the past if the battered furniture strewn throughout the chamber were anything to go by. The wall murals depicted many of the depravities of the Temple in its heyday and the many skeletons lying about the floor showed that this was the scene of some slaughter in the past. The central fountain no longer flowed but water still stood in the confines of the surrounding pool. The plinth from which the water would have flowed showed signs of a large statue being recently removed. The only exit, other than the corridor through which he entered the hall, was a door in the south-western corner of the wall opposite. As he was currently alone, he decided to retreat and describe what he had seen to his fellow adventurers when they got a reprieve from the attacks they were enduring.

Bow, meanwhile, held the Temple guards at bay in the southern corridor, but he was being slowly pushed back by the weight of numbers against him. Johan, in his Hasted state, got to Tarquin very quickly and was able to divinely Heal him back to a consciousness. Bow managed to hold off the Temple guards long enough for Tarquin to be healed sufficiently to be able to then help him in the combat.

After he confirmed that Tarquin was able to fight again, Johan retreated back up the corridor, followed by Bow and Tarquin, to the safety of their comrades at the corridor intersection. To cover their retreat, Max threw one of his concocted smoke bombs amidst the Temple guards, which split four of the guards off from the rest. The two fighters swiftly killed the four human guards but just as the smoke cleared, it revealed a mass of fur and snarls; bugbears had replaced the guards they had previously faced.

Vox returned from the large chamber at full tilt and changed back to human form as he alighted beside Cormac and Theoderic. He then concentrated on the power word for using the single daily charge on his diadem and sent a Lightning Bolt down the corridor which destroyed almost all of the bugbears in a blinding flash of electrical energy. Cormac and Theo then joined forces with Bow and Tarquin, and they made short work of the four remaining bugbears.

The silence within the confines of the dungeon complex was almost deafening after the clamour of near constant battle din had subsided. The fight had taken up most of their resources and almost everyone sported an injury of one kind or another. The party gathered their wits and decided that they would try to hole up whilst they recovered their powers, rested and honed the nicks out of their weapons. Maximillian suggested that they headed up the corridor to the door in the northern section that he had checked out whilst the fight was ongoing. The thief checked the door over for traps and finding none he clicked open the well-oiled lock on a big store room brimming with weapons, barrels of foodstuffs and various other Temple essentials.

Whilst the rest of the party checked the place over, Max returned to the T-junction to set up the last few of his small fire-traps just in case of unwanted visitors. The two magic users, almost drained of magical energy, hunkered down to sleep so that they could restore some of their magical abilities.

Bow headed off alone to the large reception chamber that Vox had just told him about to search around for a hidden door that would lead him into the chamber from which the crossbow bolt that set off this whole chain of combat originated. Unfortunately, his searching proved unfruitful. His thoughts then turned to finding out what lay beyond the only other exit from the chamber. He was just about to cross the chamber to go through the far door when he heard noises from beyond. He swiftly retreated back the way he came but felt that his potential pursuers might catch sight of him before he reached the safety of his companions. Rather than head directly back to the store room, he darted up the first few rounds of the spiral stairwell to hide whilst he tried to listen to who or what passed below.

Bow was only missing for about a quarter of an hour before Max, who was on watch, heard the tramp of many feet. He briefly worried about Bow not being back with them before he then heard one of his traps being sprung. He noticed four little creatures that were prodding away at the sides of the corridors with their spears. He thrust his head inside the chamber where the rest of his companions abided and called for help. This roused the rest of the party from their ease, and they grabbed their weapons and shields in readiness for more combat action.

The three fighters and Johan barged their way past Max and into the corridor in the hope of cutting off the attack at the junction where they could control the numbers of the enemy that would join the combat. They swiftly dispatched the three or four goblins that were searching for more traps before a brace of gnolls pushed their way to the front.

Bow, from his hiding place up the stairwell, heard the combat start up, so he peeked around the last bend in the staircase. He noticed that the enemy before him at the bottom of the stairwell appeared to be human, and most likely were the leaders of the attacking party, so he decided to hit them from the rear to sew confusion amongst the ranks of the latest patrol of Temple guards.