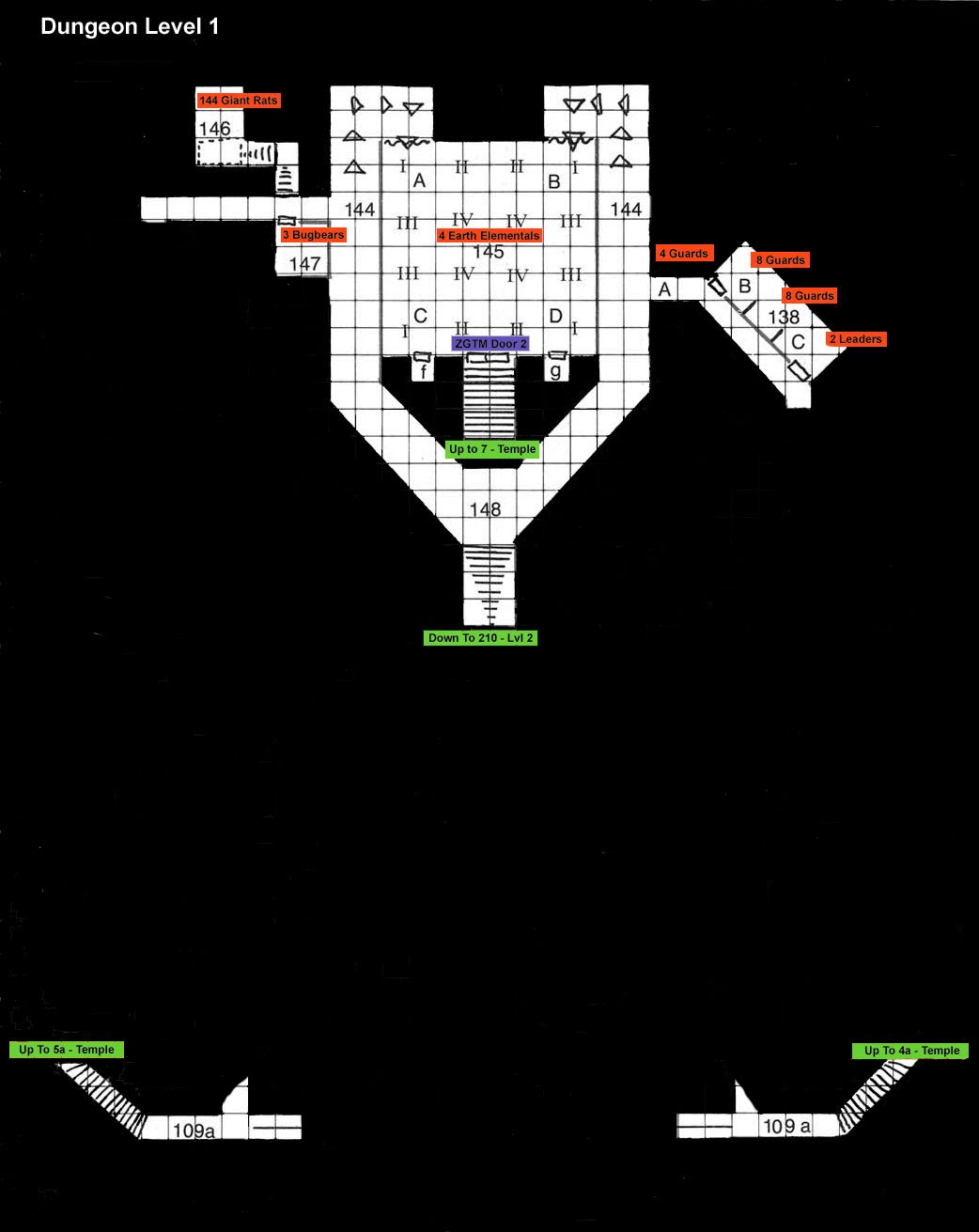 Joahn, the priest of Balder, called upon divine aid and soothed the wounds of those that had fought the creatures from the Abyss. At the end of the corridor the dancing lights from the torches flickered, then grew in strength as the dark shapes that carried them formed up into a battle order only scant chains away from the adventurers. The Temple guards then let loose with their shafts and the party ducked for cover behind their shields as they awaited the inevitable charge.

However, Vox decided he would not take any chances as the numbers were certainly not in the party’s favour. He let loose with his most powerful dweomer; the Fireball raced down the corridor and exploded amongst the guards. It spread flame and confusion amongst the ranks of the men-at-arms, but the screams of the dying were quickly cut-off by the intensity of the magical heat.

After the screams and shouts had died down Bow, Tarquin and Theoderic advanced along the corridor to investigate if there were any survivors of the maelstrom of fire. As they arrived at the corner, they just caught sight of the heels of two of the Temple guardians retreating around another corner in the corridor.

The retreating guards were too far ahead of the three fighters to be caught easily, and they were also wary of a trap that might be sprung upon them around the next corner, so they decided to quickly explore the end of the corridor. A wide set of steps led down to what they believed would be the second level of the dungeon.

Bow, who had positioned himself slightly ahead of his colleagues, decided to look up the corridor that the escaping guards had run up. He had to retreat rapidly as the expected ambush was sprung upon him. A volley of crossbow bolts and a shower of javelins were swiftly followed by a tirade of magical cursing.

He retreated rapidly back to where he had come from, urgently yelling at his two comrades to join him in the headlong rush back to the safety of the rest of the party back down the corridor. The three fighters rounded the corner, turned and formed up a defensive shield in readiness for the arrival of the rest of the guards.

Whilst Bow, Tarquin and Theoderic prepared for the ensuing combat with the second set of guards, Cormac and Maximillian investigated the side corridor from which they knew, according to Johan, the bugbears had emerged.

Cormac thrust his lantern into the room on the left hand side of the corridor and swiftly followed it with his head. This room was indeed an abandoned guard room for something other than humans. He closed the door behind him without bothering to search the room fully.

At the same time, Maximillian investigated the door opposite. He checked the door over for traps, and finding none, he pushed the door open. The darkness beyond revealed nothing but a set of stairs down, so he threw a small lantern-oil bomb to both light the way and warn off any potential threats in the darkness. He heard no screams or shouts of pain when the flames erupted but he began to hear scrabbling and squeaking noises in the distance. He ignored the small noises and threw another oil bomb down the pit at the end of a second set of downward leading steps that were revealed by the first lantern oil missile. This only proved to increase the noises that he heard until suddenly a horde of giant rats burst out of the pit and launched themselves at him.

In his panic he flung a final, un-aimed fire bomb at the approaching wave of teeth and claws but he was rapidly overtaken by dozens of the very fast moving, and obviously very hungry, giant rodents. He was bitten several times during his escape but just managed to evade the bulk of the swarm and slammed the door on the vast horde of vermin. Unfortunately about a dozen of the critters got through the door with him, but Cormac was there to provide the thief with cover whilst he made his escape. Vox, who had been watching out for them at the end of the corridor cast a Magic Missile spell that destroyed half their number and Johan cast a Sticks to Snakes spell upon seven sticks he had collected for the purpose and the rats were swiftly dispatched by the snakes that were summoned.

The black-cloaked Temple guards ran round the corner yelling war-cries to their beloved Zuggtmoy. They hoped to destroy the three fleeing fighters in combat but instead Johan, who had swiftly drunk a Potion of Human Control, ordered them to a halt. Confused, the guards stopped in their tracks but did not offer a fight to the waiting fighters of the party.

Johan then ordered the guards into a huddle and made them drop their weapons and begin to remove their armour. Bow, Tarquin and Theoderic used this opportunity to pass through the ranks of controlled guards and ran back to the ambush site round the corridor to find that half the compliment of guards that Bow had seen, along with their presumed clerical leaders, had gone.

The fighters set up another defensive cordon in expectation of their return whilst Johan spread some Keoghtom’s Ointment onto Maximillian’s wounds which not only healed them but removed any risk of disease.

The three fighters realised that no threat was to come from that direction, so they decided to see if they could chase down the clerics and their remaining guards. They ran round the corner to see if they could catch them in the rear but there was no-one in sight; they had delayed a bit too long. They decided to still pursue the Temple guards but a lantern lit side corridor stopped their advance. A quick dart into the side corridor revealed to Bow that there were two doors along its length, and a small table and chairs at the far end showed that this was obviously a guard’s position and most likely the site of some kind of barracks. They decided not to investigate any further at this juncture but carried on with the pursuit of their quarry along the corridor that they now assumed joined back up with the earth elemental chamber.

Whilst Vox, Maximillian and Cormac recovered from the encounter with the giant rats and discussed what they would do next, Johan lined up the guards and began to take their confessions to shrive them of their sins, whilst Maximillian did the same with their money pouches. Cormac and Vox then heard a muffled explosion in the distance; it seemed to come from the earth elemental room.

The Temple clerics and their guards had advanced through Maximillian’s fire-trapped curtain and had set off the muffled explosion which Vox and Cormac had heard. They then poked their heads around the corner to spy out the party. The adventurers were ready for them though and Vox spotted them straight away. He did not mess around and cast a second Fireball at the guards. After the screams had died down Vox, Cormac and Maximillian went to investigate and question any survivors.

Johan, now left alone with the remainder of the Temple Guards, told them to seek out their comrades and then left them to their own devices. The cleric re-joined his companions in the earth elemental chamber and the guards marched off back towards their barracks in search of their colleagues.

From the barrack rooms, the three fighters also heard the explosion and then the screams of the dying Temple guards so ran towards the glow at the end of the corridor. They passed through the burning curtain but only sustained minor injuries, and arrived in the chamber just in time to see the rest of their party enter the earth elemental chamber through the curtain on the other side of the chamber. The party searched over the scorched bodies but only found a couple of items, a suit of chain armour and a mace, upon the bodies of the assumed Temple priests that were not affected by the heat of the Fireball. They picked these up for later Identification.

After the fight had concluded, Cormac and Johan gathered up the weapons and armour from the ensorcelled guards and stored them in the bugbears’ guard room. Whilst the rest of the party were busy collecting up and storing weapons and anything else useful they could find, Bow spotted the ensorcelled guards cross the earth elemental chamber. Just as they reached the exit, the guards jeered and ran from the party; the effects of Johan’s control had finally ceased to have an effect on them. Bow let them go – what could they achieve anyway? He used the opportunity to return to the barracks room and search it, but other than a few pouches of low denomination coins and guards’ weapons there was nothing to be found of any value from a brief search.

Once they had stowed away anything that they thought might be of any value, the party readied their own weapons and advanced upon the wide steps that led down to the second level of the dungeon beneath the Temple.