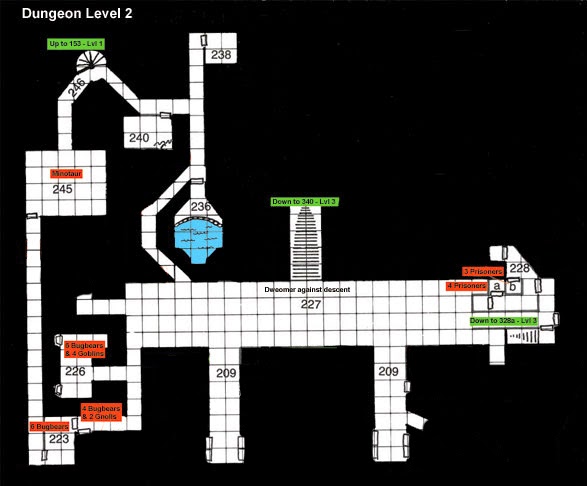 The din of battle assaulted the ears of all those confined within the corridors of the second level of the dungeon complex. The doughty adventurers fought hard against their underworld foes. The front line, however, proved too much for the last remaining goblin, so he ducked back behind the hulking gnolls and slipped quietly into the junk-filled side room. Johan, however, noticed his escape and wanted to give chase but he was hampered by the bulk of the gnolls that filled the corridor.

Cormac and Tarquin pushed forward and the gnolls gave way, which gave Johan the opportunity he was looking for. He followed the goblin into the room, swiftly followed by Maximillian. The two adventurers took a quick look around the room, but the little goblin seemed to have disappeared. As the pair of adventurers advanced into the room, two dark, stealthy shapes emerged from the shadows. The one nearest to Johan was able to strike him from the rear before he could react, but the superior reflexes of Maximillian managed to save him from harm that came from the other direction.

Despite his great wound and subsequent shock, Johan was able to fend off another strike from his attacker and Hold Maximillian’s foe. Whilst the fighting continued to rage outside the room, Vox and Cormac were able to enter the chamber and aid their comrades. Tarquin and Theoderic held their own outside the chamber; they cut down an enemy warrior every few moments, inexorably pushing them back towards Bow who fought their rear guard.

Johan was incensed at being attacked in such an unchivalrous manner and began to beat out his anger on his attacker. Cormac ran to his aid whilst Vox and Maximillian attempted to dispatch the Held ambusher before the spell wore off. Somehow this simple task eluded the rogue and mage, even when Vox used the waning power of his Polymorph potion and changed into the guise of a wolf.

The goblin emerged from his hiding place behind the curtain to seek a way to escape whilst the party were engaged in combat, but Cormac hacked him down with his sword momentarily after dispatching Johan’s attacker. Vox, in wolf form, sank his teeth into the remaining guard’s leg whilst Max continued to plunge his dagger into their foe, but it required Cormac’s aid to finish off the very hard to put down Temple minion.

Meanwhile, in the corridor outside, Bow and the other fighters rapidly whittled down the Temple guards, gnolls and the remaining leaders until the last half-dozen turned and fled for their lives. Bow gave chase followed by Tarquin and Theoderic a short distance behind. The Temple guards retreated pell-mell through the large audience chamber with the fountain but two were quickly cut down by the ranger. The Temple guard sergeant managed to escape through the far door with one of his cohorts by ordering the remaining two guards to hold and bar the door.

The guard left in the room was cornered by Theoderic and Vox who had arrived on the scene in the guise of a small bird, whilst Bow and Tarquin hammered at the barred door. The Temple guard was subdued quickly and subsequently questioned. He proved to be very scared and as a result of his weakened state-of-mind he gave the two adventurers details of the other Temple minions he knew about on the second level as well as directions on how to get to the locked door room the party were initially ambushed in and the southern corridor. He also gave them directions for a variety of routes down to the third level. They let him go on the proviso that he left the dungeon. The guard did not need convincing and fled up the stairwell.

Bow and Tarquin smashed the door down very quickly and captured the other Temple guard beyond. They spotted, just in time, the last two Temple guards as they escaped through a door at the end of the very long corridor beyond the fountain room door. The captured second guard proved to be more recalcitrant than the other one.

Whilst the rest of the party assembled in the fountain room, Bow and Tarquin questioned the Temple guard, but he proved very stubborn and resisted them as much as he could. Bow wanted to follow his quarry without delay, so he forced his Potion of Diminution between the lips of the guard and shrank him down to a more manageable size. He then frog marched the shrunken, and thus more pliable, guard down the corridor and forced him to show where the rest of the guards could be found and how the dungeon was laid out.

He returned to the rest of the party after struggling through a few rooms towards a large, wide corridor. The rest of the party had by now searched the room and explored the plinth but had found nothing of interest whilst they awaited the return of the ranger. They agreed to follow Bow’s lead and headed towards the prison block that both the guards had told them about when questioned.

They advanced cautiously through a few deserted rooms that were obviously guard rooms for the various human and otherworldly humanoids that they had encountered during the course of their foray down in the dungeon. They by-passed several side corridors in their trek towards the prison area but also found that the guard was extremely reluctant to go anywhere near the set of main steps down to the next level. The party picked up on his fear and decided to avoid the stairwell too.

When they did finally get to the prison sector they found that all of the prisoners had been slaughtered and their gaolers had fled. The Temple at this level felt empty now that the party had fought so many groups of men-at-arms and other minions, and had passed through so many empty guard rooms. They asked their prisoner about the rest of the dungeon both on this level and above and below but he could only reply that the complex was vast and he was only privy to certain areas of it. They forced the guard to show them the way down to the next level from the prison complex and then let him go too; he would only have been a burden on the rest of their mission.

Temple Dungeon Level 3 (part) - Coutesy TSR/WotC
The party found the small stairway down to the next level as described by the guard and opened the door at the bottom of the flight onto a corridor that branched in two directions. They advanced cautiously along the main corridor that ran westwards whilst Bow quickly scouted out the room that they had by-passed to the east; it proved to be a store room devoid of life. Bow grabbed a few handfuls of supplies and handed out the trail rations to his comrades who were now all injured to some degree, very tired and very hungry. They needed to find somewhere soon to rest up and allow the magic casters to regain their spells.

They approached a small junction and decided to continue to head westwards as they surmised that the bulk of the dungeon would be in that direction.

Along the west leading corridor they eventually found a door beyond which they hoped to hole up. They slipped through the door that Maximillian assured them was trap free and entered a long wide corridor with an archway at each end. Along the north wall was a long table covered with writing implements and sheets of vellum, parchment and papyrus, with several stools close to it. This was obviously some kind of scriptorium. Vox helped himself to a few items on the table and stuffed them into his pack.

The party stalked through the alcoves at either end and into the main laboratory beyond. The four large tables they discovered in the main room were covered in magical paraphernalia which Vox made a bee-line for. The rest of the room was a jumble of urns, cupboards, shelves and boxes.

Whilst Vox was otherwise occupied with looking through the assembled items, the rest of the party explored the rest of the chamber. A flowing fountain of water was found in the south-west corner of the room from which the party refilled their flasks. To the east end of the laboratory were two alcoves behind wooden doors. In the alcove beyond the southernmost door the adventurers spotted a large table on top of which they found a huge construct; an ogre’s head and body, a bugbear’s legs and a bear’s arms and claws proved too much for them to consider disturbing it, so they re-covered the corpse with its shroud and decided to leave it well alone. They backed slowly out of the room and then blocked egress from the room with a heavy table.

The second alcove proved to be full of more experimental equipment, but was otherwise empty of any potential threats. They sensed that this would make for a safe place to hole up, so Maximillian spiked the main chamber’s door. Vox used the time that the rest of the party explored the two alcoves to replenish his spell components from the materials that were contained within the vials and urns upon the main workbenches and he also picked up a handful of items that he thought might come in useful at a later date as was his wont.

However, the noise from Max’s hammering and the rustling of the mage must have disturbed something within the detritus under the benches and a slew of tentacles emerged that groped for something to fasten onto.