Hordes of the Things - Magic User base

This HotT base has taken a long time to put together. I finished the Amazon priestess a year or so back but wanted to put something else on the base as she looked a bit alone when it was just her on her horse. One of the wargaming magazines had a cover mount of some Mantic Ghouls a few months back and I thought they'd fit the bill nicely (I was going to initially do skeletons, so the undead theme worked wonders), as the priestess had a skull-tipped wand.﻿ Anyway, here she is summoning the undead from their graves to put against her foes. 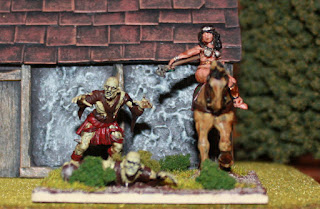 Here is another shot from a different angle that shows one of the ghouls actually clambering from the ground. I quite liked the affect and it makes a change from all of the figures on a base being on their feet. 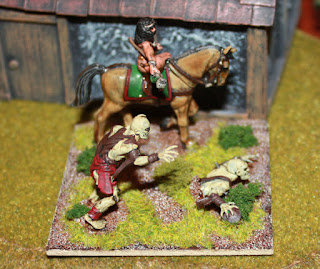 ﻿
I also put some paint on a really old Citadel Balrog/demon-type figure. Hopefully I can get that finished by next weekend.
I also got further into the map mood I am in and decided to try to make something of the map I got with a pdf version of the AD&D module T1 - The Village of Hommlet. I have the original 1979 module, but it is safely put away somewhere, so I used the pdf version of it for a bit of reminiscing of games of yore. So far I have managed to ship the map out of the pdf and add some colour to the trees and river. I will work on this over the coming weeks and show you the results of my electronic brushwork when it gets to a presentable stage. I will probably do the same for the village of Nulb map too, but tidy it up and make it look more compatible with the Hommlet map. I would dearly love to play some AD&D again, but may convert the module to 3E (the only other D&D set of rules I have). I may try an ePBM style of play, but will have to figure out the way to go on that though.
Posted by Little Odo at 16:36