Harboth's Boys back on the warpath 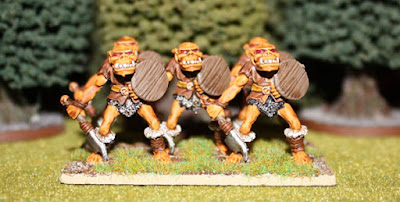 I managed to get another stand of HotT Harboth's Black Mountain Boys completed this week. This brings the total to 3 stands of blades for the orcs now. I still have harboth himself to paint up with his standard bearer. Unfortunately I didn't get the musician when it was out as I only bought two boxes at the time - perhaps a trip to eBay will be needed to remedy that?

I still have tons to do to complete an orc army for HotT but my dwarf army draws ever closer to completion. I have another stand of Dwarf Blades on the paint station which would bring my army total to 16AP when completed - just another 8 points to go.
Alongside the dwarfs there is another LotR statue nearly completed and some Roman Auxiliaries just started. I still have a little paint dabbed on those 2000AD Judges, so they will be completed soon too. I'm a bit behind schedule with my resolution for painting but should catch up again soon.
Posted by Little Odo at 21:13