The two boys were at a loose end yesterday evening and they asked me if I would referee "the board game" as they put it. I said that I would but as time was getting on we would run the game a little differently to the usual line 'em up and charge, with the winner being the one who broke last, type of scenario. This time I decided to drop a few of the advanced rules I had introduced in the last couple of games (regarding leaders and break points) but introduce the concept of victory by objective. So, I set up a little scenario for them to play out.

A small band of Rohan warriors found out from a local shepherd that there was a very important, but sickly Orc chieftain holed up in a small barn by the local river. They were told that he only had a small body guard with him, so they decided if numbers were fairly equal then they would trust to chance and try to eliminate the chieftain thus making a telling blow agianst their enemy.

The orcs were to set up around the barn and Rohan would set up on the left side of the board. To kill the chieftain the Rohan warriors (at least two of them) had to get to the barn, stay there one turn (to open the door) and then enter the barn (thus killing the bed-bound orc chieftain). 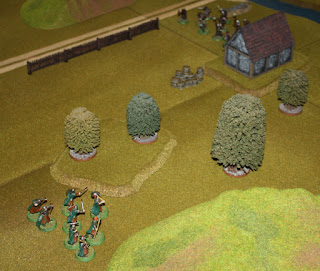 Turn 1 - Rohan Priority
A small band of Rohan warriors advanced from the west towards their objective in a small huddle; each man nervous and wondering what might greet them at the riverside barn. Meanwhile, a small warband of orcs crouched lazily outside the barn whilst their chieftain suffered from a fever within. Once he was better, he would lead them on a path of destruction throughout the Westfold. 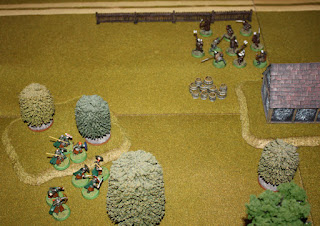 Turn 2 - Rohan Priority
As the goodly warriors advanced upon the barn the sharp ears of the orc lookout picked up on their steady progress and yelped the alarm. The orcs grabbed their weapons and advanced upon the Rohan stalwarts. One of the orc scouts managed to get a shot off with his bow but the shaft failed to find its mark. The rest of the orcs clashed with their hated adversaries. 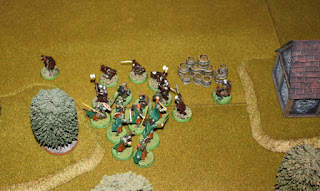 Turn 3 - Orc Priority
Now that combat was joined, the orc numbers told and they began to encircle their foes. The Rohan troops put up a brave fight in the hope of breaking through their ranks and putting their chieftain to the sword. Unfortunately the two-handed axes and support of their spearmen caused grave injuries to two of the brave Rohan warriors. 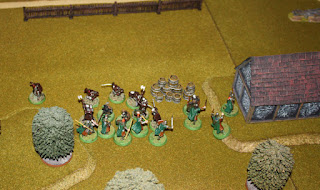 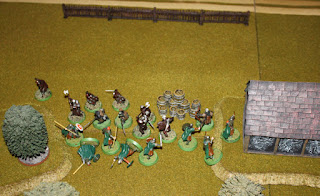 Turn 4 - Rohan Priority
The broken ranks of the Rohan shield wall allowed the two archers to peel off and advance towards the barn entrance supported by a solitary swordsman. The orcs redoubled their efforts to defeat their foes but the wily Rohan captain managed to split his forces in such a way that they diverted the main force of the orc attack away from the two archers tasked with killing the orc chieftain.

With a little support on the flanks, the Rohan troops were able to keep the orcs away from their assassins. Unfortunately the heavy two-handed axes of the orcs took their toll and another Rohan warrior fell to the ground. The remnants of the shield wall put up a grim defence and were rewarded with dispatching two lowly orc warriors. The remaining orc archers attempted to stop the two Rohan scouts from breaking into the barn, but their shafts either bounced off their armour or stuck in the wooden door frame. 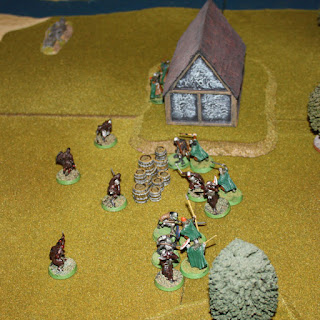 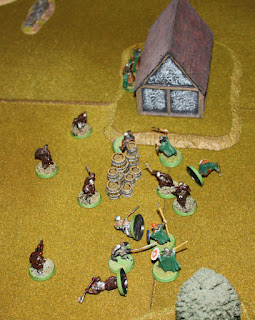 Turn 5 - Rohan Priority
The two Rohan archers finally broke the door down and entered the barn. It took a few moments for their eyes to adjust to the gloom within, but as soon as they saw the cot on which the orc captain lay they loosed their arrows with deadly precision and killed him where he lay.

Meanwhile, outside, the Rohan troops whooped in joy at the death screech of the orc captain and attempted to make their get away. They ran as fast as they could, dodging the deadly arrows from the orc bows, but one poor fellow could not escape the deadly kiss of a two-handed axe. He fell before he could join his comrades in the woods to the south. 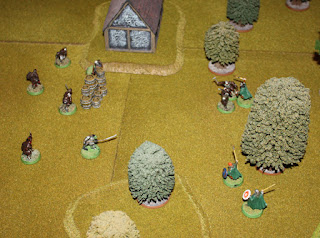 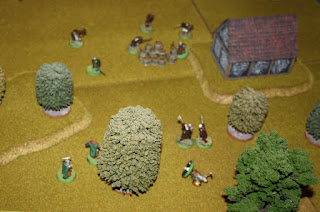 Summary - a Draw
A few things could be taken from this rather short game (it lasted about 30 minutes). The boys still saw it as a kill 'em all type scenario - I had to keep reminding them of their objectives.

The orc teaming up of a two-handed weapon supported by a spearman proved to be a deadly combination. This is definitely something to think about if I play with them in the future due to their generally being inferior troops. The Rohan shields proved pretty useless as they do not provide anything extra to the troops' defence at this level (I haven't introduced the 'shielding' rules yet).

We did not use any leaders in this game, so there were to be no break points. The game was designed to have ended after 10 turns as I supected the boys would play a bit of cat and mouse whilst they attempted to manoeuvre their troops to achieve their victory conditions. It only took 5 turns of direct combat in the end, but it was a very tense 5 turns.