The burning sun rose like a devil’s eye alighting upon its next victim. The heat from the summer sunrise quickly burnt off the vestigial mist and dew that hung close to ground level within the confines of the Temple ruins. Bow rubbed his eyes, yawned, and surveyed the vista from his perch atop the ruined tower where he had spent the night on watch.

A few moments later Vox appeared and handed him a steaming bowl of porridge and a hot mug of spiced wine. The ranger bolted down the victuals, smacked his lips and headed down into the tower to meet with the other members of his now rested party. 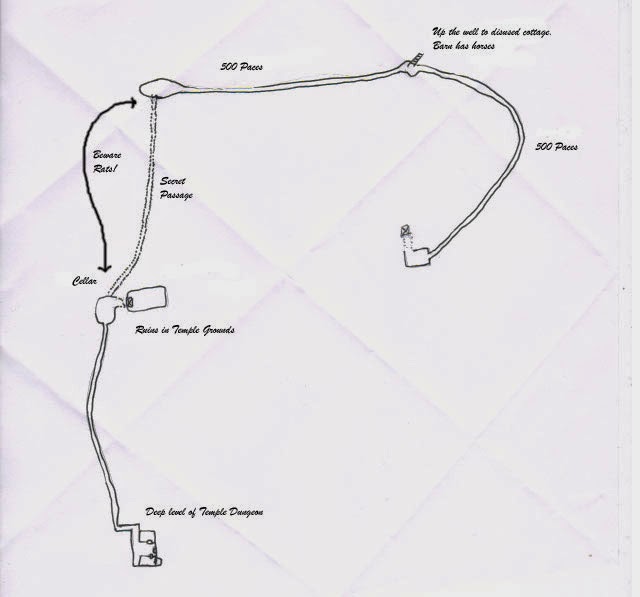 Strewn across the main table was a pile of papers including the map of the underground passageways that Johan and Vox had discovered the day before. The party of adventurers studied the secret map and concluded that it was of an underground network below the Temple grounds; a few landmarks could be surmised from the writing contained thereon. As they had not found the secret door they presumed was in the tower, they decided that they would need to enter the tunnels from another point.

With nods and grunts of consensus, the companions donned their armour and readied their weapons whilst Johan removed the Warding Glyph from the door. The compatriots issued forth from the tower and headed towards the ruined building Bow had spotted from his vantage point atop the tower’s ruined ramparts.

The courageous adventurers breasted their way through the tall, sickly undergrowth in the general direction of the ruined building. Just as they thought that they were getting near to the ruins, they all heard a scampering and chittering noise that seemed to come from all around.

All of the party readied their weapons just in time as a horde of dozens of giant rats streamed towards them through the grasses and shoots that surrounded them. The rats did not present the party with too much of a problem as they were easy to kill in great numbers and Cormac had a field day, easily slaying half the number that attacked them. Unfortunately, all of the party except Johan picked up several scratches and bite marks from the rodents’ wicked claws and teeth.

The party found the ruined building amongst the tall sickly plant growth within the Temple grounds and whilst they searched around the building ruins they uncovered a small tunnel that led beneath it. Bow took up the lead and descended down it, but the small size of the opening and the subsequent narrow tunnel meant he had to progress by shuffling on his feet and knees in a hunched over position. When he reached about half-way down the tunnel he again heard the chittering and scampering of giant rats. He swore under his breath and reversed his movement up the slope but the hordes of rodents swarmed all over him before he had the time escape the confines of the tunnel. The ranger played a slowing strategy and gradually reversed his way out of the situation with the horde of rats following him into the open air.

Johan cast another of his Glyphs of Warding, the pass-phrase to which he called out to Bow when he came in sight. The ranger shouted the phrase when he reached the appropriate point, then stood up and stepped aside from the tunnel mouth just as the rats boiled out of the nest. The momentum of the savage creatures carried them all over the glyph and the entire horde was zapped by the electrical energy that Johan had put into it.

Bow had picked up more bites and scratches but survived with his sense of smell being the worst assaulted; the burnt bodies and singed fur of the giant rodents had left a cloud of foul smelling odour that drifted towards the party.

The party headed down the now cleared tunnel and found that it opened out into a basement of the building above. There was nothing really of interest in the room except for a deeply stained and well-worn carpet on the floor to one side amongst all the rubble and earth mounds. Bow pulled it aside to reveal a trap door that led down a steep stair to a sub-basement. In the sub-basement were several dozen barrels full of passable beer and wine, and dozens of earthenware jugs that contained a good quality wine. After the two encounters with the giant rats all of the party needed to steady their nerves and wash the taste of rat from their gullets. Behind one the larger barrels Gull discovered a secret door that led beyond the man-made storage room into a natural underground cavern.

The party cast about the empty cavern and found the release hinge to the secret door indicated on the map. They followed the secret passage but did not encounter any more of the rats that were mentioned on the map.

After they had reached the dead end a few hundred paces along the natural corridor, Gull found the secret door that allowed ingress to the big cavern beyond. The thief also discovered how to work the swivel mechanism for the secret door to allow them exit from the chamber back into the fissure they had just exited from if they needed to escape in a hurry.

The party’s courage was up as they had encountered none of the aforementioned rats below ground so they dashed along the long underground fissure towards the well that was mentioned on the map.

The Horses and Guards – early afternoon

The party climbed the ladder that was indicated on the map with a little care and emerged into a small barn yard. The barn a few dozen paces away was ramshackle but still had a roof and all of its walls and doors were intact.

The two scouts swiftly investigated the environs of the barn and well and found that there were 6 well-groomed horses in the stables. They only snickered slightly when the party approached them but Bow noticed they were running a little short on fodder. All of the riding gear and trappings were also present within the barn, hung upon various hooks and nails.

The party made a note of all of this and dropped back down the well to explore the remainder of the underground cavern complex.

They proceeded along the last curving fissure back towards what they thought might be the tower they had left earlier that day. As they emerged into the small room at the end of the fissure, two darts shot towards the scouts at the front. Two crossbow armed Temple guards attempted to reload their crossbows before the rest of the adventurers could enter the room but they were too slow and were cut down very quickly by Cormac and Bow. A quick search of the chamber revealed a few metal caskets that when forced open spilled their contents upon the floor; dozens of pearls, silver and gold coins and three magical potions were contained within. A quick search around the rest of the chamber revealed what turned out to be a magical cloak similar to that which Paulix had picked up many weeks back as well as a quiver with nine magical arrows. Gull selected the cloak whilst Bow added the nine magical arrows to his quiver.

Johan used up the last of his healing spells and so the party decided to rest up long enough for him and Vox to regain all of the spells that they had used so far this day. Vox used the time to cast a Detect Magic on all of their treasure to date and thus the party knew what was magical in their hoard even if they did not know what it did. The fighters also needed another rest after all of the fighting, and Gull had begun to sweat more than usual but all his wounds had not been healed yet, so nothing untoward was thought of his condition at the time. The party decided that as the day was wearing on that they would make the underground chamber their camp for the night and so were able to rest and recover fully, except for Gull who had developed a slight cough.

The grotesque carvings on the walls of the Temple seemed to warn them of the dangers they would find lurking within, but the party pressed on never-the-less. They walked up the steps that led to the main entranceway and tip-toed through the shattered remains of the two double-sized bronze and iron bound valves.

Cormac kept an eye out and spotted the two side doors that the old crone from Nulb had mentioned, but as the main doors had been blown off of their hinges, the advice the old crone had given him seemed a waste of time now.

The feeling of unease grew stronger with every step that the party took inside the Temple; the friezes and carvings on the walls did nothing to detract from that feeling either. The main vestibule, with its reddish-brown slate-like stone slab flooring and the scenes of torture, enslavement, killing and other unspeakable acts depicted on its wall paintings and carvings, was dimly lit by the sickening light that filtered in through the filthy, broken stained glass windows many feet above.

The nave ahead, with its pillars of pinkish marble shot through with worm-coloured veins, added to the feeling of unease and sickness. As the party continued into the depths of the vestibule they spotted an altar ahead of them beyond the massive nauseating roof-supporting pillars. In the distance they could also just make out a stairway that seemed to head down into the gloom.

To either side, the wings of the Temple drew back towards an altar on either side. The adventurers chose to make their way towards the one on their left (the west) but the uneven footing and many broken tiles and slabs of broken stone led to Bow slipping over and getting hurt.

They passed by the stump of a granite monolith; this would have been a main altar before it was violently assaulted and destroyed. Around the altar the adventurers spotted a short length of bronze chain, a twisted manacle, and a bronze-wood maul with a snapped haft.

Beyond the door behind the altar, the vestry was also found to be in much disarray. A broken bowl and ewer, the interior of each caked in a dried brown substance which Bow recognised as dried blood, had obviously been flung in anger and hatred, and shattered upon the far wall. All of the furniture within the vestry was smashed to pieces and scattered about as was a brace of black Temple cloaks. Beyond all of the destruction, a deep, dark stairwell beckoned the party downwards to the dungeon complex below.