The beating of a score of midnight wings thrust aside the insipid man-height grasses to reveal the ravens’ prey. The adventurers, their sight impeded by the tall undergrowth, could only call out to each other in warning of the impending attack from above. The archers loosed many darts and bolts which struck their attackers but did little to slow the attack.

The giant ravens descended upon what they thought were a helpless band of puny humans, but this band of humans was more than met their beady eyes. The razor sharp beaks and claws of the aerial assailants proved no match for steel weapons and armour and the battle was soon over. The adventurers nursed a few minor scratches and peck marks but only one raven managed to escape the melee and fly off in the direction of the distant tower.

The Doors to the Temple

The party advanced towards the tower in pursuit of the last raven but the pull of the grotesque masonry of the huge temple building beside the path turned them thither instead. The two scouts, Bow and Gull, got to the entrance before the rest and took a look around. The huge double valves of bronze that once stood in the main doorway at the head of the elevated entranceway plinth had been blown asunder and pieces of the doors lay about the area in a charred scatter.

Bow and Gull explored the area and took a peek within the huge gothic building but could only see a large vestibule with columns that supported the lofty roof through the limited light that filtered into the Temple from the broken windows and roof tiles above.

On his return outside, a glint of gold from within the piles of debris caught Bow’s eye. He reached down to take a look and, after he had wiped away some of the blackened residue, realised it was the amulet that had been stolen from Johan a few months back. He quickly stuffed the amulet into his pocket and returned to the rest of the party. 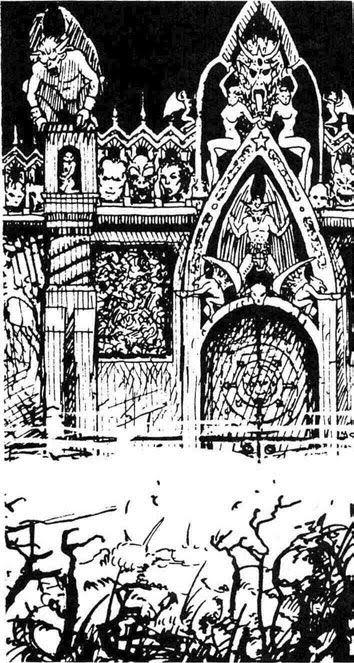 Temple Frontage - Courtesy of TSR
A Second Encounter with Ravens

It only took the matter of a few minutes to carve a path through the tall undergrowth on the way towards the tower. As the tower loomed closer the companions noticed that there were other paths that criss-crossed their own that ran between the tower, another ruined building in the distance, and the main temple building.

Just as the compatriots cleared the final curtain of repugnant undergrowth before the tower, they again heard a cacophonous cawing of large crows. The night black angels of death swooped down from the eaves of the tower and began to peck and claw again at the adventurers.

There were not so many of the giant birds this time round, but these raptors seemed far more incessant in their thirst for blood. The one that had escaped previously must have somehow relayed the danger posed by this particular band of men, so they attacked with greater ferocity than those previously encountered.

The combat lasted longer than the previous encounter and the scratches and bruises that the party had picked up not half-an-hour earlier began to take their toll. The fighters could hardly be touched in their suits of steel but Gull seemed to take more than his fair share of hits. After just a few minutes of hacking and slashing upwards at the giant ravens he fell to the onslaught of beak and claw. Vox swallowed a Potion of Invisibility and ran to his comrade’s aid whilst the birds kept up their incessant pecking at the thief’s face. Vox was able to fend off the birds long enough to administer a Healing draft to the rogue who sat up in wonder at what had happened.

Meanwhile most of the great raptors had been felled by the three heavily armed and armoured warriors but one raven slipped through their defensive net of steel and attacked the poor thief again. Gull fell to the floor unconscious for a second time but was beyond the immediate aid of Vox on this occasion. However, the young mage cast Magic Missiles at the raven that was attacking the thief and killed it outright just as the fighters finished off the remainder of the giant birds with their swords and maces.

Johan rushed to the side of the thief as the last of the ravens was brought down from the skies and administered a series of Healing spells to bring the unfortunate thief around again.

The party had taken a bit of a battering in the encounter and decided that they would need to rest up soon, but not in the Temple itself as the dangers contained within were most likely more than their match in their current state they surmised. They agreed that they should raid the tower that they were just outside of and use it as a safe haven whilst they plotted their next moves for raiding the Temple. They realised that they would most likely need to get under cover soon as patrols were sure to come around soon if the noise from the last combat was heard.

The adventurers investigated quickly the outside of the tower and made note of the four dark arrow-slits, the ruined second storey and the overall run-down and overgrown look of the structure. Whoever had razed the Temple in the past had also made sure that the outer defences were also reduced in effectiveness.

Gull tried to look in through the arrow-slits but could see nothing but blackness beyond. He listened at the main door across the footbridge over the dry moat that surrounded the tower but could hear nothing beyond.

Bow counted to three and burst the door open, only to be greeted by a hail of arrows and crossbow bolts, none of which, miraculously, hit him.

Vox did not want to fight another prolonged battle, and just wanted to get his head down for some sleep so at the first opportunity he called for his comrades to step aside whilst he hurled a Fireball into the midst of the tower’s interior.

The screams of fear and agony that followed the searing heat of the spell confirmed that the tower was guarded well, but most likely not for much longer. Bow and Cormac raced into the furnace to find that they only faced three standing adversaries; maybe a score or more men-at-arms lay scattered about the barricade in the room in charred heaps.

The ensuing battle lasted but a few minutes as the injured Temple Guard leaders could only put up a token resistance against the enraged warriors.

Rest for the Night

After the last three remaining guards had been dispatched Vox and Gull investigated the two closed doorways within. The two rooms proved to be the private chambers of the leaders of this band of guards and were quite well appointed.

After he had closed the main door to the tower and set a Glyph of Warding inside the entrance, Johan chose one of the rooms to rest up in and pray for a full suite of Healing spells whilst the thief and magic user searched for valuables. Cormac helped with searching the chambers and then sat on guard beside the main door whilst Bow took to the roof of the tower as lookout. He found nothing in the tower above other than nesting materials and guano from the giant ravens.

Vox prepared a meal for the party from the supplies he had found in the tower’s stores and then cast a Detect Magic spell over the goods that they had looted from the rooms and guards. The party had found a few more magical weapons and items of armour, as well as a few potions and plenty of treasure. The magician had also found a small sheaf of vellum leaves and an accompanying quill and ink. As he thumbed through the loose leaves he noticed that one of them contained a list of names and places. He only recognised the one name though; that of Mellub from Staneford. As he was about to put the sheaves into his rucksack, Johan spotted that one sheet, when it passed in front of the lantern that Vox used for his light source, had a hidden inscription upon it. Vox held it up to the light, and there was indeed some ink-work on it; a map of an underground tunnel system.

Johan returned to the common room of the tower and ran his healing hands over his companions’ wounds. After everyone had been fully healed he returned to his room again, exhausted. The party realised that to get the best out of their cleric they would need to hole up in this location for several more hours whilst he rested and prayed for more divine help. Vox also needed a short while to get a new selection of spells learned in time for their next foray towards the Temple itself.

The party decided to rest up overnight and as the lanterns for the evening were lit they covered the arrow slits with bedding to stop their light from shining beyond the confines of the tower. They did not want to give away their position to passing patrols by not observing the blackout that was obviously in place.