Session 16: The Cult of the Dark Dragon Lord ()


The cast of heroes


The party’s work never seemed to be done. The threat of the dragon Nephyros would mean a continent in turmoil; bandits, cultists and evil men abroad, harassing the farmers and townsfolk of Khorvaire. The band of adventurers realised that the scale of this war would escalate, and they needed more help than just the good nature of the local town and their immediate environs. They decided to visit the mayor and fill him in on the dire situation and request his aid in the forthcoming struggle.


The mayor mentioned that there was a cult that was growing in numbers over the last year, but he thought it was just one of those “End of the World” cults so chose not to take any notice of it. He said that they preached about the coming of the end and that the cult members would inherit the world in the aftermath of the conflagration. He also mentioned that members seemed to be strong and fit – just the right type of people for an armed struggle. The party requested any form of aid he could give them and he said he would send a small armed contingent and tents for refugees, but as he would also be looking to his own defences, that was all he could spare right now. The party were grateful for this.


Knil sent out word to his Elf kin, Arken requested aid from the , Rioja put out the word for help to other mages in the land and Korum spoke to the Thieves’ Guild for any rumours they had heard about the cult doing the rounds.


Over the next couple of days offers of support and aid started to come in. The elves would be sending a small force to bolster the defences of Gerudos (they would arrive in about two months), and the of Din promised a few clerics and paladins would arrive prepared for war. The fame of the adventurers also brought in more recruits to swell the ranks of their small militia.


Rioja started to Miracle Grow food for storage in case a long drawn out siege or war was to affect the local population – he thought two years of supplies hidden away in their dungeon complex would feed the locals in their time of need. He also grew cash crops to sell so that the heroes could hire on a small mercenary army to bolster their own small force.


Korum’s request for rumours paid dividends. The local thieves had their ears close to the ground and told him that the Cult of the Dragon, based in the woods near Darguun half a day’s travel away, was fortifying and building fortresses. He arranged for his stable boy (also a member of the local Thieves Guild) to join and attempt to infiltrate the cult. They arranged certain ways of communicating with each other that only Thieves would know about.


Preparations seemed to be going to plan until a few days later when Korum received a request for aid from the stable boy who had infiltrated the cult. His cover had been blown and he needed rescuing – but under cover rather than a full blown military operation. The coded message also mentioned that the cult had spread throughout Khorvaire, they had accumulated vast armouries and were about to mobilise. The local cult numbered around four dozen and had occupied a few stone fortresses within the . The stone fortresses were well defended both physically and magically. It appeared that the cult was also well aware of the adventurers but spoke of them with fear. Korum knew just the person to affect this rescue mission.


Bardan, in disguise, along with a couple of the local thieves joined the cult by offering their fighting abilities. They were given the same contact instructions by Korum and set off into the woods to attend one of the strongholds. Korum and Knil followed at a discreet distance and began to scout out the area over the next few days, whist Bardan and the two thieves settled in. Bardan immediately attracted attention due to his fighting prowess and was able to meet the cult’s local leader, Chamdar. Chamdar was always accompanied by three heavies, but Bardan did not see them as a threat. He would create a diversion so that the two thieves could rescue their comrade, the stable boy, and escape with as much information as possible.


The fighter managed to pull one of the cultists to one side between rituals and prayer sessions and began to interrogate him. He found out that they were due to strike Gerudos within the next couple of weeks after a long period of preparation. At the same time, other cult cells would attack other local power centres, destroying them in the process and thus paving the way for domination and the coming of the Dark Dragon Lord. In true Bardan fashion, he knocked out the follower and stashed him outside the stronghold where Knil and Korum would find him. He grabbed his robes and further disguised himself as a brother of the cult. He then returned to the stronghold in order to look for Chamdar.


It did not take him long to make his way to Chamdar’s chamber. The three heavies were standing guard outside the door. Bardan pulled back the hood of the robe to reveal who he was. One of the guards immediately cowered in fear and scuttled to the nearest corner but the other two drew their swords. In two strokes of his axe, the fight was over. He sauntered over to the third guard, knocked him cold and tied him up.


The commotion brought Chamdar to the door of his room and he stuck his head out to see what was happening. Bardan head-butted Chamdar, which knocked him out, and tied the cult leader up securely. Bardan searched the room beyond the door and grabbed a few scrolls that he thought looked important. He also found a small pouch containing 500 gold pieces. In true Bardan fashion, he set light to the chamber, picked up the leader and exited through another door in the chamber opposite the one he had entered through. This led through a maze of tunnels that exited the keep outside of its protective walls on a cliff above the sea.


The commotion caused by Bardan gave the two thieves the chance to track down the stable boy and rescue him. The flames set by Bardan spread quickly and the smoke rising from the fortress was seen by Knil and Korum. They made their way to the agreed rendezvous point and met with Bardan, who took a short while to get there due to the distance involved getting from the secret exit. They had two prisoners to interrogate, so they could now gather more information about this dreaded cult.


They took the bound and blindfolded prisoners to their dungeon complex for questioning. Normal interrogation did not seem to work upon Chamdar. He felt the pain but would not reveal any secrets of the cult. It was then that Arken released him from the spell he was under by Commanding his cooperation. This did the trick and although the party did not learn anything new everything that they had learned thus far was confirmed. Bardan was tasked with putting Chamdar out of his misery and the underling was set free to return to his cult and spread the word about how they were right to fear the adventurers and the return of Aphyros.


Everybody returned to making preparations for the forthcoming battle. The palisade surrounding the village was coming along nicely and would be finished in a few days. Korum and Bardan oversaw the final construction whilst Knil began training archers. Korum was pleased to see his stable boy was back where he belonged and the two thieves reported back to their Guild. 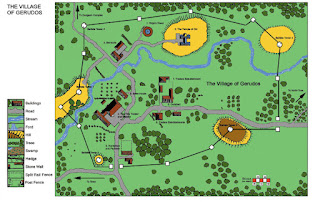 The party now had a fairly hefty defensive force…


More patrols were set up and those on guard duty were doubled in number. They were now just awaiting the arrival of Knil’s elven kin, the paladins and clerics from the , the magic users who said they would aid Rioja and for Bardan to begin recruiting suitable mercenaries to aid in their defence.


The village had enough stores in the dungeon complex to feed the entire population for 2 years. Rioja had also sold enough grain for the local town to hold out for a while too. Tim, the steward, was very busy making sure that their war chest was kept topped up and the books balanced. The entire party donated all of their wealth to the project, meaning Tim had 20-30,000 gold pieces with which to make final preparations. The underground tunnel complex was also completed at last, linking Rioja’s Tower, the , Korum’s Tavern, Knil’s tree and the dungeon complex. The only ones who knew about this complex of tunnels were the party themselves.

The adventurers now waited for the storm to begin.
Posted by Little Odo at 13:01