Last week Mrs Odo and I took the brood away for a bit of RnR. We visited Ambleside in Cumbria again. We have been to the Lake District on several occasions now as we all love it there and it is good for our household budget (renting a cottage is a lot cheaper than staying in hotels).

We did all the usual stuff for the kids including the boat ride on Windemere, a train journey on the Haverthwaite steam railway and so on, but for entry onto the blog my little historical/archaeological days out are more appropriate.

Luckily Mrs Odo was 'into' the historical stuff more this time around and I got two days out to visit sites. On the first of these two days, we managed to visit Brougham Castle (see new blog photo), Mayburgh Henge and Arthur's Round Table. On the second day we visited Lanercost Priory, Banks Tower (on Hadrian's Wall) and Birdoswald.

Brougham Castle proved to be very popular with the children as they could run around and explore the remains of a well preserved castle. Originally built in the 12th Century, it served as a border castle well into the 17th Century. Just down the road from here were a couple of Neolithic sites that I had wanted to see for decades.

Mayburgh Henge has a very impressive bank but only a solitary standing stone left in the centre. It is wierd for not having any ditches associated with it. Henges are named so because of the bank and ditch systems; Stonehenge is not actually the rings of impressive standing stones but the ditch and bank around it - the stones are supplementary to rather than the actual henge monument. That said, common parlance says that the whole monument is the henge  - who am I to argue with such impressive structures and their designated nomenclature? I will be visiting Stonehenge soon as they are redesigning the whole site for a totally new experience. Anyway, back to Mayburgh Henge, here is a picture of the standing stone that also gives some idea of the bank's size in the background. Even more impressive considering it was made of pebbles from teh local river as opposed to being dug up from the surrounding earth. 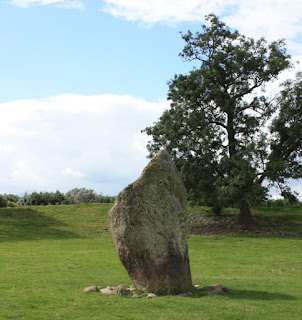 Here is a photo of the blurb associated with the site.﻿ I am not sure if I am allowed to reproduce it here, but I am using it purely for eductaional purposes - more of you out there should go visit these wonderful sites. Hopefully some of my non-UK readers will find the data of interest too. 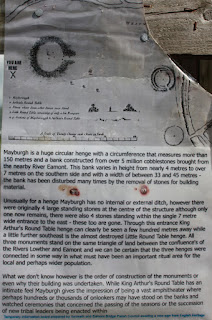 Just down the road from the castle and henge mentioned above is Arthur's Round Table. This is a henge in the true sense of the word - banks and ditches. I am not sure if the photo below does it any favours, but I found it a fantastic monument even though it is just a series of earthworks. The large circular flat area in the centre (left of picture) was assumed to be where King Arthur jousted with his fellow knights. All poppycock of course, but a wonderful story about how people try to explain unusual formations in the landscape or stories from their past. 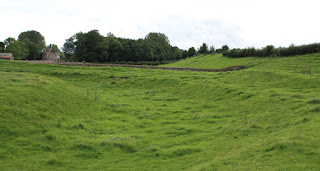 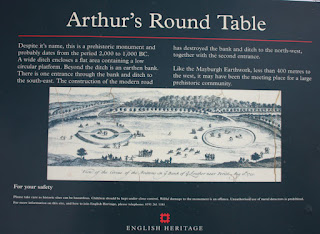 Lanercost Priory on our second day's worth of visits proved to be popular with the kids again - lots of room to run around and explore. It was an interesting site in that so much of it was preserved following the devastation imposed on religious houses during the reign of Henry VIII, and the fact it had the local parish church still operating within its grounds. Continuity at this site is very impressive. 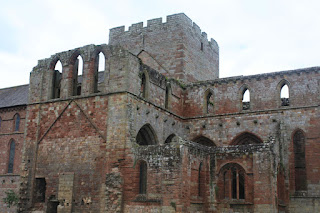 Leaving the priory behind, we drove a little further up the road and called off at one of the better preserved towers that are still extant along the length of Hadrian's Wall. Banks Tower is so called due to its close proximity to Banks village a few hundred yards down the road from it. It is very small, but would have provided a small contingent of troops to patrol the wall as well as being a possible site for a signal beacon to warn of the approach of potential enemies. From a mock up of a wall tower at Birdoswald, the height of the wall and tower would have provided a difficult challenge to any who tried to cross the border at this point. 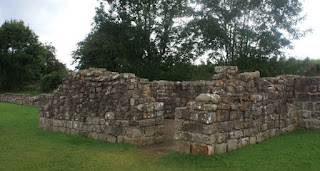 Our final destination was Birdoswald - another Roman fortress situated along Hadrian's Wall. We have been here before (last time we went to The Lakes we saw a Border Reivers show put on by English Heritage and a re-enactment society - in fact one of my previous blog title photos was of a couple of the chaps from the society having a barney). I didn't take any photos this time around as I have plenty from the last time, and I only wanted to put up details of new places I had visited. Maybe I will run some galleries at a later date of my historical and archaeological travels.

We have stayed in Ambleside on three occasions now and every time we go I try to visit the Roman remains there. Each time I always seem to miss out on them. Perhaps if we stayed somewhere else next time we visit Cumbria I would find the opportunity to go visit - it seems that if something is on your doorstep, you are less inclined to visit it as you have "plenty of time" and it is "just around the corner". I can say the same for sites local to where I live too!