Session 12: A Stronghold is Constructed ()


The cast of heroes


Korum spent the best part of the day searching the wizard’s keep for further hidden doors and treasure but was unable to find anything of interest. Meanwhile, Arken collected up the fragments of the orb and placed them into a bag for later use. Rioja continued studying the scrolls and tomes within the wizard’s library and managed to find out exactly how the golem worked. He instructed it to follow the party and guard them against harm. The rest of the party headed into Kakariko, the town local to the tower, to collect supplies for the homeward journey.


The adventurers arrived back at their stronghold in the south just over six weeks later. On their journey they encountered no major problems and the Darkness had not returned to haunt them. As they rode up to the environs of the tower, they saw that the workmen had done a good job of clearing their entire fief of blasted wood, making the two piles requested – firewood and good building timber. Other than the bare earth, only Rioja’s tower, Arken’s and Knil’s tree were left standing.


The party rested up for the rest of that day and made plans on what they would like their newly acquired plot to contain. Rioja had his tower, Arken his temple and Knil had his tree, but the defences against mundane enemies were lacking, as was a suitable trading establishment or two. There was also the issue of the evil dragon to contend with, so defences against that enemy would also need to be considered.


Rioja wanted to fulfil the promise of restoring much of the blasted forest to its former glory, so headed into town to seek the wizard’s aid. He had acquired the learning of the Miracle Growth spell and wanted to share his findings, so that both wizards could repair the damage done. The two sages set to work repairing some of the damage to the area outside the party’s zone of control, replacing the forest as if it had never been harmed in the first place.


Bardan, tasked with security, was sent into town to recruit some men-at-arms and enquire after a weapons smith who could build watch towers, ballistae and catapults. As the new recruits filed into the vicinity over the next few days, they were drilled in low level hand-to-hand combat. The weapon smith arrived with a crew of carpenters and set about building a barracks for the newly acquired men-at-arms, four watch towers on the perimeter of the area that was slowly being built up and a ballista to go in each, as well as two spares.


Korum, whose only real interests were money and food decided to get the plans together for a large tavern, brewery and stables so that he could start up an establishment to cater for weary travellers. He had a variety of workmen brought in to begin work on the stone foundations.


Knil had disappeared throughout most of this week to seek solace with the sacred tree, and ask its permission to build a dwelling within its branches. The magical nature of the tree, however, meant that it would grow a suitable dwelling for him to live in.


As they also wanted the stronghold to be relatively self-sufficient, the party headed into town to see if any merchants would like to set up at their rapidly growing establishment, and they had not a few takers. They also managed to persuade a few farmers and foresters to join their community to provide food and other sellable commodities. This led to requests to build a new guildhall beside the tavern – which were granted.


Whilst all of this building work and recruitment was going on, Arken was also busy readying his temple for a new congregation of worshippers. He asked Rioja to repair the dragon orb just in case the good dragon needed somewhere to hide again, which he did do, but as a few pieces of crystal were not recoverable, there were a few small nicks and holes in it, but structurally it was as sound as it ever was. This was placed in a niche of importance. He also placed the Chalice of Din onto the main altar, but made sure he protected it with a variety of glyphs and warnings (the first warning set off a paralysing glyph, the second blindness, and the third a bolt from the gods).


During the morning, the Mayor from the local town turned up to see how far the work had progressed. He was given a guided tour of the facilities, and expressed his highest admiration for the work being carried out. The forest was being grown back rapidly by the two wizards, the farmers and foresters were tending the crops and animals and the small militia force was now able to hold their spears properly. The tavern, guildhall, barracks and watch towers were all starting to show promise (although it would be a few months before any of them were completed), and a few curious travellers pitched their tents and caravans on the fields opposite the main settlement and started to trade.


The mayor could see things would be prosperous for this little settlement and wanted to be a part of it. He suggested that he could send over a squad of well trained men-at-arms to help with training the militia and showing them how to work the ballistae until the force was up to strength and sufficiently trained. The party also asked him to recommend a steward to help them with running the place, especially for when they were away. He agreed to send a highly ambitious young steward over right away; he had been tasked with the redevelopment of the southern part of the town and had done an extremely good job.


Just as he was about to leave, his true intentions came to the fore when he asked about taxation and trade with the main town. The party agreed to his terms that they would pay taxes at the same rate as everyone else trading in the town. This seemed to cheer the little fellow up and he returned to his gig in high spirits, wishing the party well in all their ventures.


Good to his word, the mayor sent a squad of well trained men-at-arms and the steward the following day. The troops immediately set about pitching their tents and ribbing the raw recruits about their techniques of warfare. The steward, Tim, was all he was cracked up to be, and the party hired him on for a trial period to see how he managed.


Arken, meanwhile, had been in close talks with his goddess, who told him a little more about their quest. The evil dragon Nepheros, as they were well aware, had created three aspects of himself to help in his conquests; the Spirit (which indeed was the Darkness), the Hawk (the liche the party had defeated in gaining the chalice) and the Beast (which turned out to be a creature Arken and Bardan had encountered before the rest of the party joined them). But, he was also told that there was a fourth power now arising – perhaps it was the great dragon himself?


Arken relayed all of these details to the rest of the band and they immediately set themselves to preparing for another journey back to the north. Supplies were bought and instructions given to the steward about how they would like the place run in their absence – this would be a true test of Tim’s capabilities. 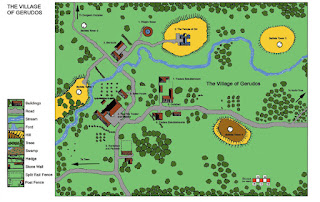 
The journey north again proved to be uneventful. In fact, things had actually improved as the streams of refugees had stopped and many people they spoke to said that the threat they had faced weeks before had ceased; the great lords of the north must have sent troops out to crush the bandits in their lairs. The party nodded sagely and thanked the people for their gossip.


However, upon arrival at Kakariko a different sentiment greeted them. Although the raids that damaged property and killed people who were out at night seemed to have ceased, the Beast had returned to terrorise their livestock.


Arken and Bardan knew exactly where the Beast’s lair was, so they led the party through the forest to the north-west of the town. They found the cave down a narrow defile but things seemed quiet within. Korum crept inside to take a look but found no traces of recent occupation; the only thing he found unusual was a rectangular indentation in the earth floor. Arken told him that that was where they had found the chest that contained the dragon orb. Retracing their steps, they headed back to town to find out what was happening.


They arrived at their usual tavern and spoke to the barkeep, who pointed them in the direction of a few farmers who had been sorely hit by the night time raids on their flocks. Loosening their tongues with a little alcohol, the farmers told their stories. One had been raided three nights ago and the other only the previous night. All of their stock had been slaughtered. Even the usual goblin raids had ceased. The last of the group said that he still had his full flock, but that was probably because he brought them into the barn every night since the raids had started. After the promise of full recompense, he agreed to allow the party to use a few dozen of his flock to lure the Beast into a trap.

That afternoon, the party journeyed out to the farmer’s lands and started to make preparations for the night’s ambush.
Posted by Little Odo at 15:46