Well, here we are at long last, a couple of units of Riders of Rohan that I started almost six months ago. I got these really cheap when buying back issues of Battle Games of Middle Earth a few years back. A couple I had previously painted up and taken down to my local Games Workshop for a Bring and Battle along with a few footmen and a couple of heroes (Eomer and Gamling if I recall correctly) were repainted, but as they only had about four colours on anyway, there wasn't much needed doing on them anyway. The rest have been languishing in my LotR box for what seems for ever. I am hoping to get all my Rohan figures painted up so I can start gaming with them early next year at my local store. There is a member of staff down there with a huge Isengard army who has offered up a challenge, so I really have to rise to it. I may even use them for the occasional War of the Ring battle, but as I have only played it once and don't own the rules I may use the opportunity to learn them.

Here's the first box set equivalent. I am painting each unit of six individuals in exactly the same way, but the horses are being painted a different colour to differentiate the units. As stated in an earlier post, the basic warrior units (read plastics) are getting a very basic paint job; block colours, brown wash, varnish. The flash on the camera has made them look a lot more shiny than they actually are in real life. 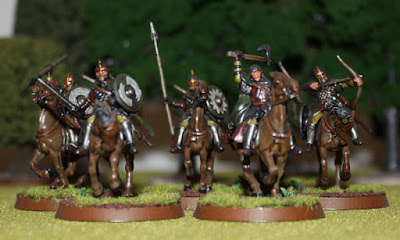 Here's the second unit on slightly different coloured horses; these are more chestnuts. Unfortunately the flash has made the figures more shiny than they are in real life. You may have also noticed that I have also done no markings on the fetlocks or muzzles on these horses. As I go up the ranks I will paint with more care and attention to detail, and with more shading and highlighting. 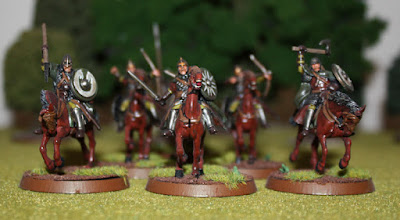 Here's a picture of the first twelve Riders.

And a couple of bird's eye views... 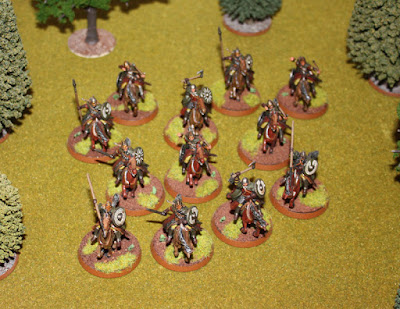 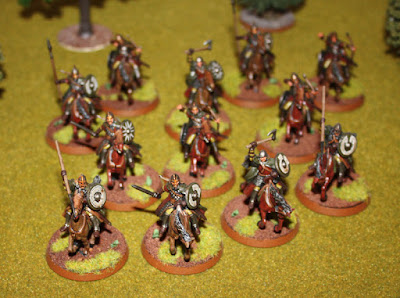 There would have been more to come today but I ran out of PVA glue to finish the bases on a few more miniatures. On the painting desk to come are:
Fantasy fighters, thieves, 'Arthurian' cavalry, more Rohan and Alex has more Bretonnains.
Posted by Little Odo at 20:52