On the gaming side of things, I have renewed my interests in the Lord of the Rings Strategy Battle Games with the advent of the new Battle Companies rules. 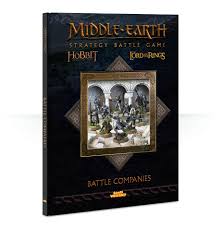 Unfortunately, I have visited three Games Workshop stores and drawn a blank so far; The flagship Warhammer store in Tottenham Court Road only sells their Warhammer ranges - so I can forgive them not stocking it, but my two local stores have both been closed when I got there even though their opening times were advertised on the website and on the shop doors! I am not amused as both times it cost me a lot of time and effort to go out of my way to personally pick up the product (and I was aiming to grab some hobby related goods too).


Recently, my youngest son, 8 years old, decided he would rather play with figures than Lego now. This is without any prompting from me. He noticed an old 2008 GW catalogue lying around and picked it up for a read. This then led him to asking me what I was going to do with a box of Night Goblins I have had lying around for many years. I said I would make them up for him and he could play with them if he wished. Next thing I know, a small parcel came through from an eBay purchase - he had asked his mum for a few items when he visited her and a little later he received some Snotlings. Not to be outdone, I grabbed him some second hand Ogres and Gnoblars at a show I recently attended. Finally, he was able to get hold of a couple of boxes of Warriors of Chaos (3 in each box) to make his little army a decent size to play with.

The other day I popped into the kitchen/study area to find him with my dice out on the table running a battle with rules he had made up himself - even down to using the direction die to see where the ogre cannons and goblin arrows flew. He was rolling to see how far they moved, to resolve combat and even took account of casualties on multi-based units.

He has a load of old LotR miniatures that I bought for him off eBay a few years back, and he has also got those out to fight against his ogres and goblins etc. He is getting more gaming in than I am these days! I will see if I can get some photos of one of his games in progress soon, and some idea on the rules he uses.

This winter holiday I will be gluing up as many miniatures as I can in readiness for a spring undercoating offensive. Then, when the light improves more (I had a serious issue with my eyes recently that has not really got much better - it is not sight-threatening but the reduced level of vision I have will not get any better) I will get some painting done both for him and for me. I am going to enjoy teaching him how to paint, and hopefully his older brother can help out too?