I am reporting this a week after the event, but better late than never I suppose? 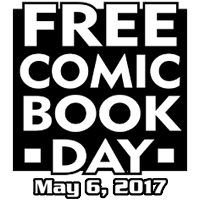 This is the second year I have attended this particular comics event. I have been following it for several years (getting  a single comic at random from my monthly order comic supplier) but I never got round to attending until recently. It is not really an event as in turn up at one place and take part, but an event that is held in several places around the world and thus can be enjoyed by people no matter where they live. Luckily, here in London, I was happy to see three events sponsored by three comic shops all within a ten minute walk of each other; Orbital Comics, Forbidden planet and GOSH! Comics.

From the demographics of those in attendance at each of the three shops I visited, this is not just an old man's pastime. The age of attendees ranged from junior school kids up to old gits like me. The majority who attended appeared to be in their twenties and thirties, which is good news for comics as a story telling medium.

I have been collecting comics for many years but never really got into the fandom thing until very recently. I mainly go to see what Rebellion are up to with 2000AD and Judge Dredd, and this year they had another special for our delectation...

I also had a list of about seven or eight other titles that I wished to try in addition to 2000AD, and I managed to pick them all up bar one; Attack on Titan by Kodansha Comics, which seems to have not made it over the pond for some unknown reason (distribution issues?).

In addition to those I had short-listed, I managed to pick up several other titles in the random goody bags given away by Forbidden Planet, bringing my total to 22 free comics; not a bad haul for a day's wanderings.

I also managed to queue up to get my limited edition alternate cover Doctor Who issue signed by the writer and artist - bonus! I missed out on the 2000AD signing as I got side-tracked by a couple of nice pubs and a few beers whilst waiting for the queue to go down (see my other blog, The Taplow Horn for more details of that side of my day out).

I have another signing day coming up towards the end of the month for the new Judge Anderson tale. This is being held at Forbidden Planet on the 27th of May and will therefore be situated ideally for another beer and burgers trip.