There has been a bit of disruption to the campaign over the last few weeks due to holidays, illness, work and what-not. Last week the players of Skins and Zook played an explore the city style session. However, this week saw four players turn up for a recap session in order to catch up with Skins and Zook. 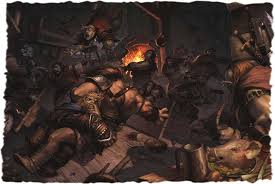 Karik wandered down to the pool and watched the lepers whilst they bathed. On closer inspection he noticed that they were not actual lepers but were malnourished and covered in sores which they tried to wash away in the waters by the Forbidden Gate. One particular member of the band of outcasts took a shine to Karik and spoke to him at length. He invited him into the healing waters, and became the first person to see the albino half-elf without his all covering outfits. Karik asked whether anyone ever passed through the gates and he was told that only criminals took the one-way trip beyond. However, with special permission from the council others occasionally passed through the portals. A recent investigation by the Templars found out something very important; an internal job. Karik thanked the leper, got dressed and left a small pile of coins for the information.

Rhogar, in the meantime, made his way to the magicians' guild where he met with a tiefling wizard. Torric visited the bards' college to gather more information and then wandered around the markets where he picked up some clothing for the ex-slaves back on the ship. When Karik began his conversation with the lepers, Salderban left the Forbidden Gate in search of the temple of the Ancients.

Whilst everyone was about their investigations, a golden sphere visited them all no matter where they were and requested their presence at Arya's Hope in the Hall of Triumph.

It took a while, but all the party eventually turned up where the golden domes requested. As the party arrived they sat at the same table with a high born noble named Daowin, a Shadow Guard of Methredel (a high-ranking Templar), who asked them to partake in a mission for the city. They were to find three missing mages last seen headed towards Magnaroc. The party admitted that they had already met with and subsequently dispatched Orsini and Veross, so only one needed to be found. Daowin suggested that the renowned pirate queen Pascha Kale, recently released from the dungeons, may hold some information. She was the captain of an unruly ship currently docked in Wasters Bay, and used to be a pit fighter, so she was very handy with a knife and good in a fight. Daowin stood up after passing on the information and request, but as he bid Torric adieu he cast a small rune on the back of his hand that would show him to be on official business.

The party retired to a local tavern that Skins had visited previously and called in on her local snoop Sticks. He greeted her warmly but was reticent with what he said until the gold began to flow. The party found out that Pascha Kale was a very dangerous individual but was indeed down at the docks. She had a good trade going in illegal drugs from Oslo with Severus Dune's eldest son.

After the final encounter of the day, the party returned to the skyship via the market and mage's guild (where Karik got the rings he had taken from Veross's fingers identified and realised that one in particular was worth a small fortune). They found that Arathea had tidied the place up and made it more habitable for humanoids and Okzar had made the working areas spotless. The ex-slaves wanted to leave but, after being told the fate of slaves and ex-slaves in this city, they decided they would stay on board until the characters had finished their quest and would then be dropped off wherever they wished.

The following morning the tax collector arrived at the docks with many men-at-arms and suggested that their presence was required by the High Council. He led the party and Arathea on a circuitous route and stopped halfway down an alleyway where the party was confronted by five dwarfs who demanded to see the owner of the skyship. Vedrick, the leader of the dwarfs and king of Greymount was taken aback when the party say that they owned it under the auspices of Okzar of Magnaroc. The rest of the dwarfs postrated themselves upon the ground.

As an honour the party invited the dwarfs on board to meet with Okzar whom they revered almost as a god - Magnaroc is a dwarf legend. The rest of the afternnon was taken up with feasting and drinking from magically refilling horns and mugs, but after a while the dwarfs had outstayed their welcome and were hustled off the ship with a promise that they could come back soon.

The party secured the skyship and headed to Wasters' Bay where they found the ship that they were looking for. They espied a woman covered in piercings with a hook for a hand giving the orders. Skins approached her to make friends but she was turned away in no uncertain terms. Seeing that the friendly approach had not worked, Rhogar moved in with a menacing air but this time the pirate queen was moved to listen, but decided she would only listen to them if Torric could sing her a song of the party's renown. He did so with flair and enthusiasm.

Pascha was so impressed that she was forthcoming with much information including the names of the noble houses that Dune was dealing with:
Regan (tied to the academy of warriors)
Serath (accused of witching and dark magic, but none of the charges stuck)
Varso (a long line of defectors to the elves)
Dune (reside outside Methredel as diplomats to the elves)
Malthor, Veross and Orsini (triumvirate of missing mages who know most about ancient history and the Diamond Sky. They are all keepers of knowledge but they disappeard about a year ago on a mission for the council).
There is a need for the drug Snuff Dust for the God of the Open Hand.

The party left Pascha with the promise that they could return the following day before dawn.

Karik returned to see his leper friends where he found out that they were worshippers of the Truth of Open Hand. The member of this sect accept The One Truth; they do not lie and tell no false truths. Karik, intrigued, became an initiate of the cult.

Torric, meanwhile, managed to get an audition at the Bards' Guild as a precursor to being able to perform at the Aer Dominicum. However, he needed to get everyone in on the act so that all could be admitted to the high council. The rest of the party decided to join in and gave a great performance but Arathea, troubled by a bunch of hecklers spoiled the show by attacking them. A bar-room brawl erupted and fists and bar stools flew everywhere. Skins loved being in the thick of it until the eldritch wizardry of Rhogar brought it to an end with the death of one of the crowd. Karik swiftly made an exit with Arathea, and Torric grabbed Skins and drew her aside whilst the guard arrived and arrested Rhogar.
Posted by Little Odo at 22:24