The fear of pursuit and the never-ending deluge of water from the heavens wore heavily upon the travellers as they arrived at the small village nestled in the valley of the Darenth River. It was still an hour or two before sunrise and nobody was abroad in the village. The party headed straight towards the fortified tower of the Thuringian lords Rufus and Burne to give them their news and warn them of an impending assault.

As they approached the steps of the tower, a voice from above called for them to halt and state their business. The party responded that they had just returned from the Moat House in the fens where they had fought a multitude of beast-men and were now coming to warn their lordships of an impending attack upon the village. As proof of their exploits, Hallan took the bugbear head from its sack and held it up for the watchman to see. The guard called over his colleague to keep an eye on the party whilst he went to awaken his leaders.

An Audience with Rufus and Burne 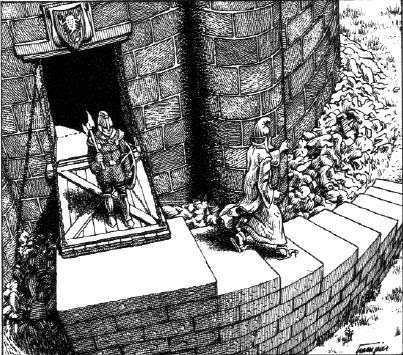 The party waited for a short while before they heard the clanking of chains and saw the drawbridge lowered to allow their access. They were not shown to either of the lords’ room but into a common room with a large table set with victuals and wine. Lord Rufus offered them his hospitality whilst the party told him their story.

The two lords and their closest advisors considered the evidence they were given and decided that as pursuit was likely then the village may at any time come under attack from dark forces. They ordered the prisoner to be taken away for questioning and sent runners to the most prominent members of the village council.

A short while after word was given to the guards to inform the village, alarm bells began to peel and torches and lanterns were lit throughout the village. The local militia were gathered together on the green; their drill and professionalism most likely marred by the earliness of the hour as well as their general incompetence.

Whilst this was going on, the Lord Burne asked if there was anything that the party required to help them continue the fight and thus aid the village in its hour of need. As they were all beaten up in some way, they suggested that some magical healing and maybe some magical aid would be handy in the absence of monetary gain.

Lord Rufus instructed his lieutenants to gather the men-at-arms and form them into patrols, as well as inform the local Sol Invictus priests that they would be required to perform some serious healing. Orders were barked and snapped to with great efficiency and great urgency as the party were asked about their next moves.

Vox, not wanting to be beholden again to a Sol Invictus priest for his healing, asked that as the offer of magical aid was on the cards could he learn a spell under the instruction of the wizard Lord Burne. This was answered in the affirmative and the two mages retired to the wizard’s chambers to study.

The rest of the party asked Lord Rufus what he was going to do to face the potential threat and he responded that he would send a small patrol up the road to act as an early warning whilst he gathered his forces for an assault on the Moat House dungeon later that day. He said that he would inform the party when he was going to raid the moat house and suggested that in the meantime they go and get healed and then rest up at the inn, from where he would call upon them.

He thanked the adventurers for their work and dismissed them so that he could get on with planning the attack. The party trudged their weary way up to the temple of Sol Invictus in the steady downpour and knocked upon the door. They were greeted by the two clerics and their manservant who enquired after what the ruckus was all about. A quick explanation was given and the companions were ushered into the small healing room where the few prepared spells of healing they had were administered to those most in need. Johan supplemented this healing with his last few orisons and then the Sol Invictus priests said that they would need to rest up and pray in preparation for the forthcoming hostilities for when their powers would be more sorely required.

A Moment of Calm - morning

The party walked back to the Plough and Stars Inn in the centre of the village, where they were quickly ushered into comfortable rooms, drawn hot baths, and plied with hearty meals and fine wine. After their ablutions they were left to sleep if they so desired.

Vox completed his training session with Lord Burne, with a useful obscuring cantrip and a spell of the highest power he had encountered so far in his spell book, and headed for the inn. He too was plied with food and drink and then, after a long soak in a hot bath, was led to a comfortable bed to rest up.

Return of the Patrol - midday

Around midday, the party awoke and made their way down to the common room, where all was still buzzing like a wasps’ nest. From the windows of the inn, soldiers and militiamen could be seen patrolling the village as supplies were transported hither and thither in preparation for the offensive.

The ranger, Bow, sensing an opportunity to make some easy cash, negotiated a good deal with the inn’s owner, Gundigoot, for the small barrel of brandy that he had requisitioned from the moat house supplies. Gundigoot saw a bargain when it presented itself, and knew that after the forthcoming battle there would undoubtedly be many shaken and thirsty customers.

A few minutes later, a bleeding and beaten man-at-arms stumbled into the village calling for the guard. He was quickly seen to by the perimeter patrol and taken to the tower to make his report. The party overheard the bulk of the story as he ranted on the way to meet his lords; his patrol was attacked by about a score of large, shambling creatures that were advancing upon the village.

The party recognised the descriptions and surmised that these shambling creatures must be the recently reanimated corpses of the bugbears and gnolls that they had slain in the moat house dungeon. The village would soon be attacked by a horde of undead, no doubt backed up by their powerful clerical or magic using re-animator. The companions, now fully rested and healed, grabbed their weapons and headed part-way up the moat house track way to slow the advance of the undead army that was now undoubtedly advancing upon them.

They only had to wait a further quarter of an hour before the pack of shambling corpses hove into view. Rather than wait for the undead to approach them unhindered, the companions let loose with several volleys of missiles. They knew from previous experience that this did little good, but every wound would reduce the effectiveness of their assailants a little.

The animated corpses drew to within melee range and combat was joined; the fighters and rogues threw themselves into the fray supported by the blessings and magical aid from the spell casters. It was not long however before the fighters, who had already taken several heavy hits, realised that these walking corpses were a lot tougher than those created from human cadavers. They began to give ground slowly, buying time for the village militia to arm themselves and join the fight; the alarm bells were clanging in the distance, so they knew that help was on the way.

At first the fight went against the adventurers and injuries began to build up. Paulix, hurt the most, retreated from the fray to give covering fire with his bow, even though it was not very effective. Vox saw that the line of fighters ahead of him had thinned a little, so he cast some defensive magiks upon himself and stepped into the fight whilst Johan continued to chant defensive dweomers for his companions’ benefit.

Even though the warriors cut down several of the walking cadavers, the numbers of the zombies began to tell as the fighters’ defensive wall began to break apart and they spilled through the gaps towards the cleric of Balder. Johan was finally attacked and the magical support for his companions winked out. At this point, the party thought that they might now be doomed to an ignoble death unless the village came to their rescue, but Ulf’s blood was up and it fired him to greater heights of fury. He redoubled his fighting efforts and cut down zombie after zombie until the tide began to turn in the companions’ favour.

After several minutes of intense combat, the party of adventurers finally overcame their assailants. The last of the zombie corpses dropped to the mud just as the local militia came into view behind them. In the distance the pounding of hooves could be heard, and looking up the party spotted two or three black-cloaked figures on horseback retreating rapidly back towards their lair.

Return of the Patrol - midday

The companions checked themselves over in case any of their wounds were infected and ordered that the corpses of their enemies were burnt as quickly as possible. The party were then swept up into the air by the jubilant crowd and carried towards the inn where they were to be celebrated as saviours of the village.

They quickly bathed their wounds and cleaned their weapons and armour whilst the priests of Sol Invictus applied healing salves and spells to bring them back to full strength. Then the companions were treated to such a night of revelry as they had never experienced before.