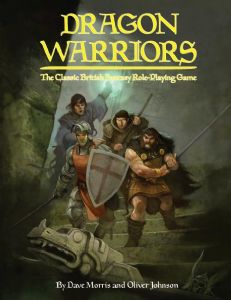 The rest of the night and morning passed uneventfully. The party rode through the wooded hills, the sun beating down on their backs as they headed ever eastwards. They were about to call a halt for a rest and to take on water when they heard the rapid approach of several armed men. They dismounted swiftly, passed their horses to the warlock’s apprentice, and formed up their battle line to face down the approaching barbarians. Those of the party armed with bows let loose and managed to hit one of the charging bandits who were making their battle cries and drawing their weapons.

The knight and thane stood shoulder-to-shoulder and faced the main onslaught, taking on two bandits each whilst the warlock and the elementalist used their magical abilities to shoot flaming arrows into the midst of the bow-armed bandits now on either side of them. Outnumbered, both of the fighters were hit, but the new plate armour of Sir Erich and the superior shield skills of Aethelfrith blocked all of the attacks that got through their fence of whirling steel. The magic wielders fared less well to begin with, and the elementalist found himself hit by one of the arrows fired at him.

The bandits that attacked the two fighters gained some initial success as their numbers told against the two stalwart warriors; Aethelfrith caught a nasty cut to his shoulder, but the two magic users, however, managed to out-shoot their assailants for a short time and thus kept them at bay. The tide soon turned though as the superior fighting skills of the party’s two warriors began to tell; Sir Erich cut down one of the bandits with his magical battle axe, and Aethelfrith’s magical sword began to take his opponents’ defences apart piece-by-piece. The magic wielders also began to get the upper hand in the missile fight, with Hillson’s barbs finding a target and dropping one of the bandits from a distance.

The missile-armed bandits realised that they could not win the melee at a distance and thought maybe that their numbers would tell in the main melee if they advanced rapidly on the spell casters to put them out of the combat and therefore allow them to all then concentrate on two well-armed fighters. Hillson counter-charged against two of the bandits but was sorely injured for his troubles, but Solaran was able to avoid his opponents by moving out of range behind his fighter companions.

Aethelfrith’s magical sword bought a third bandit his journey to the otherworld, and Sir Erich finished off his last opponent before moving to help Hillson who was struggling against his two opponents.

A fourth, and then rapidly after him a fifth bandit were then brought down by Sir Erich’s magical axe and the attackers realised they were truly outclassed by the knight and his companions. They made a run for it, but the fighters decided that they had too much of a start on them to pursue them. Solaran, wanting revenge for his injuries, had other ideas; his last shot managed to dispatch one of the last remaining bandits at the extreme range of his abilities.

As it was now rapidly approaching nightfall, the companions decided to quickly strip the bodies of any coins they carried but left their make-shift weapons and armour. They called for their mounts and rode for a short distance before making camp for the night in the woods.

The following day saw another fine sunrise and an uneventful journey until just after lunchtime. As they were travelling through a small ravine the party’s horses were startled by a huge ogre stumbling out of the woods; a large war hammer in his hands. Luckily, all of them were able to control their mounts and avoid being thrown, but they decided to dismount and fight this new foe on foot. Although they were a little wary of the huge hammer their enemy wielded.

Hillson cast his phantom warrior spell but, surprisingly, the warrior failed to find his target. Solaran was more accurate with his magicks however, and the fire arrow struck the ogre a severe blow, and set light to the furs he was wearing. Sir Erich seized this opportunity and struck the ogre with all his might, causing a traumatic wound to its left shoulder.

A fireball from the elementalist failed to find its target and another phantom warrior also failed to hit its mark. The ogre, by now, hurting and extremely angry pressed his attack against the knight, but the superior speed and agility of Sir Erich meant that he avoided all of the blows aimed at him. Aethelfrith finally found his mark with his magical short sword which opened up the ogre for a fatal blow from Sir Erich’s axe.

The fight was over almost before it had begun. The party breathed a sigh of relief as no one had been injured or even come remotely close to being hurt.

The companions rode on for the rest of the day, but the dust of their journey and the aches from their exertion against the ogre began to tell. Up ahead they espied the inviting walls of a chapel and rode towards the sanctuary with hearts uplifted. The nuns welcomed them within the walls but said that they would not be able to stay the night within the confines of the abbey itself. The party were happy to spend the evening tending to their horses, and slept soundly in the clean stables safe in the knowledge that others would watch over them that night.

The following morning, after an early service and alms giving, the party broke their fast on a simple meal of oats and fruit, and gathered directions to the town of Eastmarch from the nuns. The abbess seemed rather chatty for a nun and was happy to divulge many rumours about the situation in the local fief. It seemed like she had taken a liking to Sir Erich and talked rather more than would be the norm for one of her station…

·         Strife had been bubbling under in the marches for a short while now. The rule of the overbearing Albion Marcher Lords was resented amongst the native people of the town’s shanty suburbs and the lands of the fief. A local Old Faith priest had raised the cry for support against their cruel overlords
·         About 40 years ago, the local king had been defeated and all of his thanes had been replaced by lords from Albion – the local warden’s name is Sir Alec Brandwen
·         On the king’s escape, his crown and a hoard of treasure had been lost in the marshes
·         At certain times of the year, a Black Knight (does not seem to be on anyone’s side) is seen to block certain routes and bridges, offering to fight all-comers. No-one has ever beaten him
·         The local nuns do not seem to be happy with the new overlords

The party only needed to travel a further few hours before the crenellations and walls of the town began to show through the wooded cover of the hills. Rather than immediately pay the town’s new entry taxes the nuns had warned them of, the party wanted to make a few enquiries about the rumours of the situation in the environs.

The warriors took a walk around the small shanty town of round, thatch-roofed mud huts, surveying the castle and surrounding area for its defensive capabilities. The suburban area was surrounded by an earthen rampart with just one main hall in the centre of the ramshackle buildings. There was nothing to be found of any real value to the party, so they tried to see what they could find out from the two guards posted at the entry to the main hall. The guards were very nervous at the approach of the heavily armed party, but soon relaxed when they realised that they only wanted information about the town and its taxes.

They asked about where they could find a decent room in which to bed down for the night before carrying on with their enquiries but were told by the guards that the only tavern for miles around was actually situated within the confines of the castle, unless they wished to travel up the road to the next village about three or four hours’ journey away. So, the companions thanked the guards for the information about the taxes and accommodation situation and headed into town.

They were stopped at the gates by four well-armed guardsmen; fully alert to any sign of trouble. They were polite but efficient in their dealings with the party, quickly extolling the gate tax from them and mentioning that no weapon, with the exception of daggers and short swords (much to Aethelfrith’s delight) could be taken into the confines of the walls unless strapped up. All missile weapons had to be left with the guards but a receipt was given for anything left with them.

The party asked about accommodation and were pointed towards The Drunken Heron Inn – a place where they could stable their horses safely and rent a room and board each for a reasonable sum. They thanked the guards and headed towards the named inn safe in the knowledge that they should be safe for a while at least.

Upon arrival at the inn, the ostler showed them where to take their horses and a stable boy immediately began to unharness and rub down the horses as agreed. The rooms that the landlord showed them to were very comfortable, so they decided to pay up front for a week’s stay. It would be a start, and would offer enough time to gather their resources and rumours to work out how to make the most of their stay in the east marches.