15mm: A base of Spears for HotT

I finished basing a unit of 15mm Spears for one of my Doggerland HotT armies. These will be something I will slowly put together to form each of the four major armies in an upcoming Doggerland revisited epbm game. If I get more players, then I will need to paint up a few more bases of another range to represent those too.

Anyway, onto the miniatures - they are Two Dragons Productions' Anglo-Saxons, I have quite a few packs of these, so will be creating a large army of them. These will represent what became of the core of the Divine Bergen Hegemony around 200 years after the events that unfolded in the last Doggerland game.

These will form a division known as the Black Shields of Bergen; an elite unit that puts the mourning of Elrich the Alwise uppermost in their religious rites. The Black represents that they are mourning their lost deity... 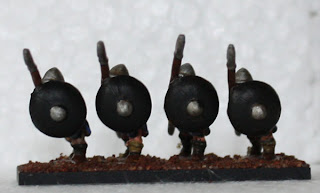 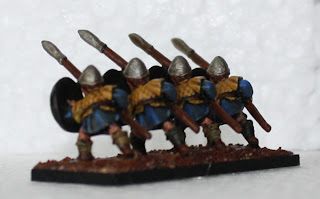 I also have miniatures to represent later incarnations of the troops of The Cantwaran Confederacy, The League of Borre and the Thuringian Empire.

In the next game, the lines of the various empires will have faded and new empires will have begun to rise from the ashes of the past. It will be gamed at a smaller scale, representing just a small part of one of the old territories - possibly Cantwara. It will be a game of diplomacy, economics and warfare between rising warlords and their immediate retinue, or comitatus.
Posted by Little Odo at 18:07