This session took place over a week ago but I am/have been on holiday so there has been a delay in the write-up. There are only two more playing sessions left before the game ends, so the denouement may be a little more rushed than I anticipated. That said, there is only one main encounter left - the one with the demoness herself. Anyway, here is the latest session... 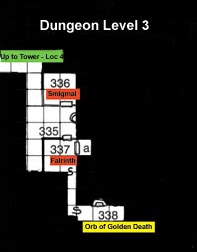 The cocks crowed at first light on the late summer morning, awakening the adventurers from their slumber. The Talehangers’ Inn at Castleford provided the companions with freshly baked bread, cold meats and hot porridge to break their fast and to stuff into their travelling packs for later that day. The party quickly splashed their faces with cold water, collected their weapons and equipment, and went to the stables to collect their mounts. They swiftly mounted their horses and passed through the Southern Gate on their way back to the Temple via Nulb.

The journey back to the ruined barn outside the Temple walls was uneventful and they tethered their horses with plentiful oats to keep them going for a day or so at least. They readjusted the strapping on their armour and backpacks and climbed down the well just outside the ramshackle building and advanced upon the lair at the end of the tunnel complex on their map.

Bow had taken point, so he was the first to turn the final corner of the underground warren into the small complex. He narrowly avoided the glowing green-eyed gaze of the eight-legged lizard that rushed to meet him upon his entry. The ranger counter-charged his adversary and out of the corner of his eye he noticed an urn upon a shelf above the fountain in the open chamber beyond upturned by what seemed an invisible hand. A spark erupted and flaming oil poured from it along the runnels set at the base of the walls of the chamber.

Unperturbed by this, the ranger carried on fighting the lizard whilst the rest of the party rounded the corner and spotted their companion in trouble. Cormac, Theoderic and Tarquin rushed in to join the fight whilst Vox and Max hung back; especially after Johan yelled out to avoid the creature’s gaze unless they wished to be turned to stone.

It took a few minutes for the adventurers to realise that no matter how much they hit the monster it never seemed to feel the pain or show any injury. Theoderic was the first to realise that even after he had given the giant lizard his best shot his sword had caused it no harm; no wound and no blood appeared where he struck the creature. He called out that the beast was not as it appeared.

Rogues and Wizards in the House – late afternoon

Bow, more single-minded in the mission than his companions, broke from the fight and decided to explore the two doors on the northern and southern walls of the chamber in order to try to find the Golden Skull. He hopped over the runnel of fire that had now lit a couple of torches set within cressets on the walls and burst through the northern door. He stepped into the dark room beyond only to be struck from behind by a small blade. His armour turned the majority force of the blade, so it only caused him minimal anguish, and he took the fight to the small ambusher behind him.

At this point Tarquin had realised that the creature was an illusion and as his disbelief kicked in, the monster disappeared from his vision. However, his companions still fought for their lives against the fearsome foe, disadvantaged by the fact that if they met its gaze they would be turned to stone. He left the fight to aid Bow in the search for the Golden Skull by opening the southern door.

He stepped through the doorway and found himself face-to-face with a wizardly fellow who cast a Lightning Bolt at him. The bolt only caught the fighter a glancing blow but it flashed past him and into the northern room where it also glanced off of Bow, struck the far wall and rebounded back to strike the ranger again. Bow was reduced to within an inch of his life.

By now, Theoderic had also realised the basilisk was a deception and he too broke from the combat to aid Bow who he saw had caught the worst of the Lightning Bolt.

With more time to think than the others from their cover behind the last stone corner, Vox put a blindfold on his eyes and stumbled forward whilst Maximillian imbibed a portion of an Invisibility potion and snuck up on the basilisk. He managed to strike it firmly at what he thought was a vital point but even he found he could not harm the creature.

Eventually all of the party except Cormac realised that the creature was an illusion and had left their faithful fighter companion to face the threat alone. It took him a while, but eventually he too figured out he was doing the beast no harm and as his disbelief kicked in, the illusion faded for him too.

Back in the northern room, the ambusher saw their opportunity and dashed for the exit. The masked and hooded rogue made it past Bow and Theoderic and then out of the basilisk’s chamber, but Vox had just pulled off his blindfold and spotted the rapidly escaping figure. He cast a Magic Missile at the retreating shape and the escapee fell to the stone tiled floor. Vox and Cormac checked over the body for anything of value and it was then that they realised that the rogue was in fact a woman.

Meanwhile, back in the southern chamber, Tarquin had moved forward to attack the wizard but a small imp-like creature had hurled itself upon his shoulders and began to claw at his neck. Johan had arrived on the scene at this time but could do nothing but watch in awe as the wizard and his familiar disappeared from their sight.

Both the warrior and cleric struck around them with their weapons and blocked every way out of the chamber but after a few minutes they realised that there was in fact no-one left in the room anymore except them.

With the fighting over, the rest of the party convened within the wizard’s chamber, where Johan dispensed with magical Healing to those who had suffered in the jaws of the basilisk or the human defenders of this part of the dungeon. They searched it thoroughly for anything of value and pocketed items that they thought would be either helpful to their cause or of value. The only quandary was what they should do with the warning note nailed to the door jamb of the only other exit from the room.

Vox cast a Detect Magic spell and discovered that several of the items that they had picked up were magical but the strongest glow was from beyond the closed door. Max checked the door for traps but found none, so Johan pulled the door open. The warding glyph held within the parchment nailed to the door jamb exploded and caught him full in the face.

After he had recovered from the shock and hurt the cleric took a look inside the small chamber beyond. This was the wizard’s store room and it was packed full of useful items for a mage. Vox took his pick from the many spell components in a variety of jars and vials, whilst Max hunted down the magical items identified by the wizard and stored them within his various pouches.

It was at this point that the party began to grow a little confused. They were assured from several sources that this was where the Golden Skull had been secreted. The adventurers began to search the walls for hidden doors but none could be found. It was only Tarquin’s curiosity with the fire outside in the open basilisk chamber that led him to discover the trip for the secret door within the southern chamber. 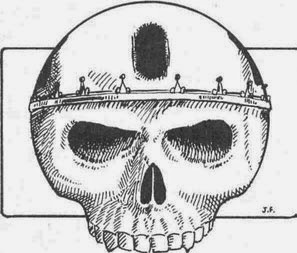 
Max quickly ascertained that there were no traps upon the hidden door and he pushed it open to reveal a short corridor beyond. He advanced cautiously along it looking for traps but the rest of the party lost patience and someone threw a lit torch at the far wall. It did not set off any traps or move in an unusual way, so they advanced into the corridor looking for another secreted doorway.

Again, it fell upon Max to discover the hidden doorway. He popped open the portal and stepped into another wizard’s chamber with a large, cold fireplace complete with hanging pots and cauldrons. This one looked more like a wizard’s study than a laboratory though and inside he spotted a variety of wizardly items and a large library. Vox and Max began to remove books at random from the shelves and stuffed them into their pockets and pouches.

The rest of the party searched for whatever treasures they could find, but it was Bow that spotted the iron box hidden away from normal sight. He handed it to Max who detected the very dangerous chlorine gas trap held within. He disarmed the trap but realised that if he tried to save it for future use it would rupture and cause great anguish to the party. Instead, he gently handed the iron box back to Bow who opened the lid to see the golden skull-shaped item within. He smiled to himself with the knowledge that their mission was almost complete, reclosed the lid and stowed it away in his back pack.

Return to the Tower – early evening

The party had got what they had come for, so they decided to make haste and get out of the dungeon before they were spotted again by the wizard returning with reinforcements.

They decided to hole up in the tower within the grounds of the Temple above ground. If it was still empty they would be safe within. But if it had been reoccupied then they might have another fight on their hands before they could rest.
Posted by Little Odo at 10:22