I thought I would do a quick run down of what is included in this month's White Dwarf. As I have little interest in Warhammer or 40K, I will limit those entries and concentrate more on the Lord of the Rings stuff - the reason I bought the magazine... 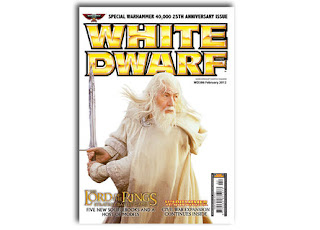 Picture courtesy of Games Workshop
A fairly large part of the magazine is made up of the usual store locators, hobby news, new releases etc., but the Lord of the Rings stuff is as follows...
pp02-07 - A (re-)introduction to the Strategy Battle Game
pp07-16 - All the new releases for the game; including new figures, rule books etc
pp24-31 - Scenario that involves lots of the new figures
pp33-45 - A run through the new books that are released this month
pp46-53 - Battle Report involving Easterlings versus Gondor
pp54-55 - A listing of the plastic box sets of figures - you now only get 1 sprue for £12 - hmm, :-(
pp76-80 - Army Workshop for Easterlings (painting guides, army builder etc)
pp58-75 - Warhammer Civil War, Necrons and Vampire Counts stuff
The last 60 odd pages are inverted - Warhammer 40K potted history﻿ (its the 25th anniversary apparently)


So, you get a fair few pages this month for your money which, to me, almost makes it worth the cover price. Luckily Alex also reads the Warhamme rand 40K stuff, so that means this was actually not bad value. Ordinarily there are only usually half-a-dozen pages of Lord of the Rings in the magazine, so I rarely buy it. The next few issues may be worthwhile, provided they stay on the LotR theme, but I think I'll skim through them before purchasing.
What did I take away from this? Well, I have ordered the plastic Easterling Kataphracts and one of the source books (Kingdom of Men - for Rohan especially) from Maelstrom Games as they are around 15% cheaper than GW direct. This should give my fledgling Easterling army a much needed boost. I am tempted by the Easterling leader types but they are in Fine Cast resin. I have heard lots of horror stories about their quality, and the one encounter we have had with them (Alex's Space Marine unit) showed us a miscast shoulder pad. If that is normal for casting defects, then count me out - I want them to be perfect if I am to pay the best part of 8 quid per figure.
Posted by Little Odo at 21:52