Alex has been off school for a week or so now, but his output on the paint station has been amazing. He has attended a one-day gaming session at school and now joined the gaming club (see previous post). Anyway, to mark his entry into the club, he tidied up his first ever Space Marines.

These were from a starter set I bought him from the GW in London's Oxford Street on a whim when he was quite a few years younger. These are painted in his style from then, but he just tidied up a few areas where he went over the lines so to speak. They are a far cry from his later stuff (see earlier and later posts), but it is nice to see how his painting has improved over the years.

There will be several more Space Marine entries over this week as Alex has finished up loads of the ones he has in his lead and plastic pile (not a mountain yet as he is still young!), and I am actually off work (some actual holiday/downtime) looking after the kids for a week.

I have also been busy, but not to the same scale as Alex, so I should have an entry or two over the next few days too.
Posted by Little Odo at 18:36 No comments:

Another major milestone has been reached on this blog. It seems like only yesterday that I started writing and photographing for this blog. I don't think I have accomplished what I originally set out to do, but have had fun and done other stuff that was of interest to me instead. I think the main thing for me was to see the unpainted lead and plastic piles diminish. That has certainly happened over the last couple of years but I haven't managed to actually play many games or write up my in(s?)ane gaming thoughts (of which there are many).

Alex has come on in leaps and bounds with his painting and gaming. He has played a lot more than I and has now joined the school gaming club, which he can properly start attending next school year (Year 8 I think he is in - these new fangled school years leave me all confused). He went to a one-day teaser the other day and just loved playing with his Space Marines (more on those in a later post). He has also had a fair number of sessions down at Games Workshop and at the local library, as well as at a few gaming conventions.

My gaming has been limited to play-by-email and one or two games with Alex. The girls are becoming interested in gaming now too, so Songs of the Splintered Lands may be right up their street. I have based up and undercoated the Druid's Children warband. hopefully I can get them painted and onto the gaming table soon.

All that remains for me now is to say thank you to my readers and I hope I can produce enough stuff you are interested in over the coming months.
Posted by Little Odo at 18:28 No comments:

Tales of the Splintered Lands

My figures for Songs of the Splintered Lands arrived yesterday (thanks Dunc!) from Splintered Light Miniatures. I bought the Druid's Children: The Faithful Warband as a starter set. 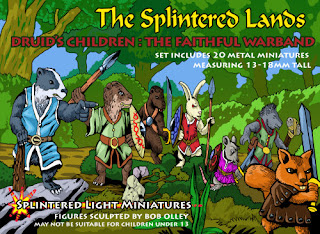 You get 20 in the box set, which I imagine will make up a couple of warbands. Here's a picture of them: 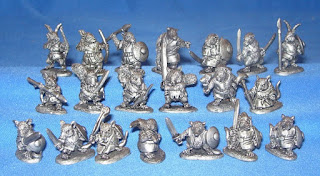 I am hoping to get some work done on them this weekend. There is very little flash on them and they are very clean and crisp. Now all I need do is identify them and stat them up in readiness for painting. I've not really painted 15mm before, so these will be a different challenge to normal. I am wondering if a brighter paint job will be best as they are so much smaller than my normal 28mm fare.
Posted by Little Odo at 10:57 1 comment:

These have been on the paint station for a long time now, but have finally been finished today. These are Warlord Games miniatures, and I have to say I really like these (so much I bought to large units of them to complement my century of their plastic Legionaries). Legionaries were usually accompanied by just as many auxiliaries into battle, so my current army now consists of a goodly amount of Roman troops...

Not a bad little army so far, but I still the high command, some artillery, more cavalry and some slingers to come. I will also make a small baggage train for them as well as a couple of small units of camel riders and elephants too. Problem is I only have a few dozen Celts to throw at them! That will have to change.

Anyway, here are some shots of the newly finished Eastern Empire Auxiliary Spearmen...

And finally the command group. I don't really know what to put onto the vexillatio, so I left it blank in case inspiration grabs me soe time in the future.


So, what is next up? I was going to paint the 36 Warriors of Rohan that are in my LotR box, but I did a bit of tidying up today and found some old Citadel Lesser Goblins and some Nick Lund Kobolds. Decisions, decisions.
Posted by Little Odo at 13:34 No comments:

Songs of Blades and Heroes

Last week I sent off for a couple of the rule books for Songs of Blades and Heroes by Ganesha Games. I have been tempted by them for several months now, and finally got round to picking them up. They need to be ordered from Lulu (the book order company, not the sultry Scottish singer) and delivery times are amazingly quick - 3 days from ordering to receiving them, even though they are printed to order!

The core rules are Songs of Blades and Heroes. These allow for skirmish games to be played with small warbands of between around half a dozen to around twenty or so miniatures. They are aimed at 15mm but can be adapted to any scale. I will be using them as 15mm rules to begin with and then maybe move on from there. I will be using them for fantasy games as they are aimed at that genre.


The second rulebook I ordered was for Songs of the Splintered Lands. These rules complement the range of 15mm fantasy figures by Splintered Light Miniatures. These were what actually caught my eye in the first place on a few blogs, but especially on Dunc's Persistent Tangent. They reminded me a lot of the Redwall children's cartoon which Alex used to watch when he was a nipper. I'll have to see if I can pick them up again on DVD soon as my youngest is now of an age when he will be able to appreciate them.


I will be ordering up some miniatures for this game very soon (courtesy of Dunc!) and getting to grips with the rules as soon as they arrive. Seeing as they are 15mm, the game can be played on a 60cm x 60cm board. I have three or four of these which can be used, and they fit nicely on my dining room table (when my paints etc aren't on there).
Posted by Little Odo at 13:13 3 comments: