I managed to finish off the final stand of my Hordes of the Things Barbarian army this weekend. This is the General stand, comprising 3 miniatures from Heroes of the Dark Ages. I really do like their range of minis, which can be used in all manner of games. 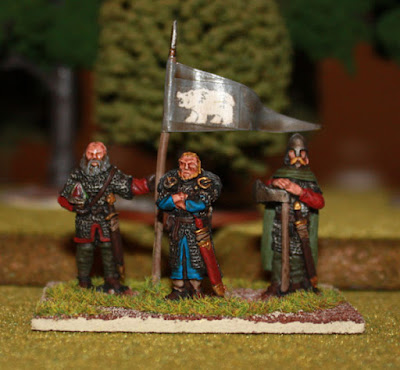 The banner is a copy of the one used for Bjarni Glittertind, one of the warchiefs from Doggerland. I am not that artistically talented, so had to rely on one of the players for the artwork. I photocopied it, stuck it onto a blank, doubled-over triangle of paper and then coated the whole lot with PVA glue and bent to shape. An easy method to create a banner, which I then painted the in grey. I think it has turned out really well, but a lesson learned would be to use the original picture without cutting and sticking first to eliminate the 'square' around the image.

Here is a picture of the full 24 point Barbarian army.

This is the same army from a bird's eye view, with my latest trees thrown into the mix. 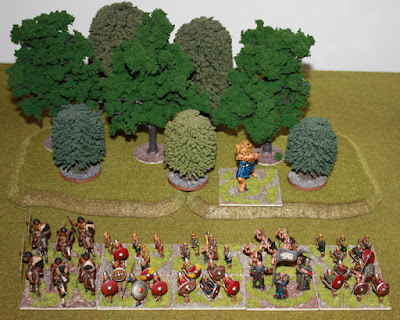 The army consists of the following units...
1 x Behemoth (Ral Partha Giant) 4pts
2 x Riders (Warlord Games Numidian cavalry) 4pts
3 x Blades (Prince August Barbarians with axes - with a few others thrown in for variety) 6pts
3 x Spears (Prince August Barbarians with spears - plus a few extras for variety) 6pts
1 x Blades (Citadel Amazons as mercenaries) 2pts
1 x General (Blades) - (Heroes of the Dark Ages) 2pts
This gives a total of 11 stands = 24 points.
I am also working on a Citadel Amazon priestess to use as a magician type for a bit of variety for this particular army, but I am stumped as to what to put on the base with her as she looks a bit lonely on there at the moment. I am also currently starting on some Games Workshop goblins and Night goblins to add to the Orc and Goblin army I am also putting together. I will also probably pick up a few of the HotDA orcs to add into the mix. My dwarf army has enough from my old Citadel and Grenadier (I think) collections to make up a full army. If not, the Ral Partha giant can always be used.
I also found some Terror Birds type animals that I started on this weekend too, as I thought they'd be fun. I think they were part of a Runequest Dragonewt Boxed Set Games Workshop put out many moons ago - I have those minis around somewhere too. The Riders of Rohan also managed to take on an extra couple of licks of paint - I am hoping for these to be finished by the end of the year.
Posted by Little Odo at 18:46 No comments:

Its in the trees

I managed to do a fair bit of painting and sorting out yesterday. The Riders of Rohan are coming along nicely and will hopefully be finished in a few weeks' time. I started on a few more old RPG style Fighter and Rogue types that I still have left lying around on my lead mountain. One thing (well, three to be exact) I did manage to complete were some Woodland Scenics trees - see picture below... 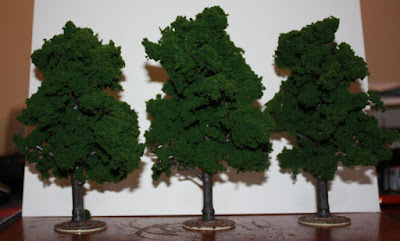 I had high hopes for these and do think they look quite realistic but they tend to shed the clumping material a tad too easily. Maybe it was my gluing technique that has led to this moulting? I will soon find out when I complete a few more over the coming weeks.

Next up should be some fighter and rogue types from the 80s and 24 GW Riders of Rohan for the 28mm scale, and hopefully I can get started on the command units for my 15mm Doggerland/HotT armies.
Posted by Little Odo at 10:42 3 comments:

Doggerland has been underway for a few turns now, and things are beginning to hot up a bit. There have been a few invasions to conquer neutral territories, but the players have yet to meet face-to-face. I am hoping this will start happening in the next few turns. 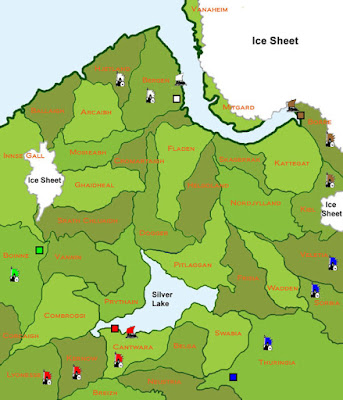 I am hoping to get onto painting up some of the 15mm miniatures for this soon - I have some cleaned up and undercoated, but they need a lick of paint to get them there.

I will be updating my e-pbm blog site each turn (http://tkol.110mb.com/), so the game can be followed more closely there. I will put the occasional update on here too, as and when something interesting is happening between the players.

I happened to visit my first international trade fair this weekend. I called in at Crisis in Antwerp, Belgium, for the day. It was a long trip, but well worth it for the experience. The crowds were good and it seems traders and demonstrators did well. I didn't actually buy much gaming wise, but I did bring home some lovely Belgian beers for later consumption.

My eyes were particularly drawn to the Gripping Beast display of a huge battle between Anglo-Saxons and Vikings. I was also well impressed with the scenery for the Arcane Armies display. There were a few companies there I had not come across before who had set up a stall, so I picked up a few leaflets and so on for future orders. I'll need to take a camera along with me next time I venture forth.

One thing I did notice at this fair though was the demographics. It certainly seems to have attracted a wider range of ages than UK trade fairs, and there were more women involved with the running of trade stands and shopping with their menfolk than I recall seeing at UK fairs.

Gaming wise, I have been running Doggerland by email. It is coming along quite nicely. The next return was due from me this evening, but it will need to be delayed a little while due to the above trip. I am going to start putting the maps and basic info up on my other site that I used to report Tavern Knights on.

I didn't manage to get any painting done this weekend, but there was lots for inspiration at Crisis. I should be putting the finishing touches to a few Woodland Scenics trees next week, and perhaps finishing off the mounts for my Riders of Rohan in readiness to getting down to business with the Riders themselves. I'd really like to get them completed by year end, so have my work cut out, but it is doable. I will also have to provide remounts for a few of my Royal Guard as the metals were just a bit too much for the GW horses and I now have a couple with legs snapped at the ankles. Not sure what to do with them yet though. I also rummaged through my bits box and found some Gripping Beast Arthurian style cavalry. They look like they will fit in nicely with the Rohan /Royal Guard miniatures. I may give them a similar paint job and see how it goes. Its always nice to have variety in an army, but I won't be able to play them at my local GW store.
Posted by Little Odo at 00:22 1 comment: