This is just a quick update post on some new stuff that is due to, or has just, come out recently for the Rohan faction on the Lord of the Rings side of the Middle-earth Strategy Battle Game.

A friend of mine (RM) has just recently bought the Battle of Pelennor Fields box set. It contains a hard back copy of the main rules manual, a softback supplemental on the Battle of Pelennor Fields, several gaming aids (dice, measuring sticks etc.) and around 84 miniatures (Riders and Warriors of Rohan, Warriors of the Dead, a new plastic Theoden (foot and mounted), the Witch King on a fell beast, a Mordor troll and tons of orcs. 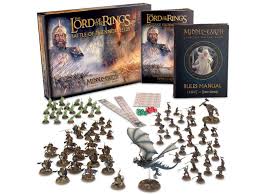 He said that the box represents great value for money as, for once, GW has produced a set that actually has contents at a rate discounted from their normally recommended prices. RM has been using the Riders of Rohan as knights in our Pendragon campaign, and they are working rather well. The plastic Theoden figure is a superb sculpt and well worth picking up on its own. 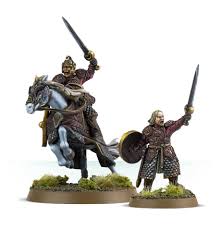 Also released are a bunch of named heroes to add to the strength of the Rohan faction. Here we can see a plastic Eowyn and Merry kit, a resin Elfhelm set and another resin set for Deorwine, some kind of King's champion. 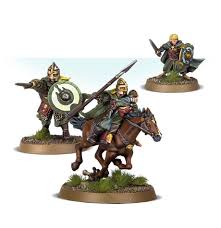 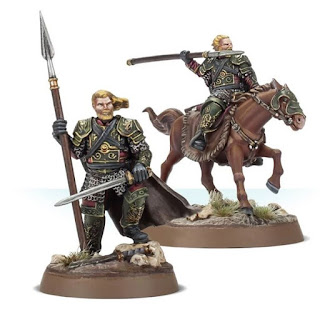 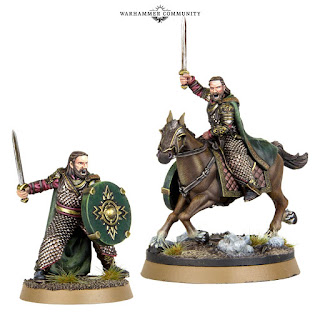 The Eowyn and Merry set allows for them both, or just Eowyn, to be mounted on her horse. This is a neat touch as I would want to field them separately anyway; I would just need to find a suitable pony for Merry.

Elfhelm is a Marshal of the Riddermark, and an actual character from the books. I was looking for a suitable minature to represent him in my Rohan army to lead a small faction of troops with their own personal emblem on their shields. I am not overly keen on resin miniatures but may take my time looking at these ones just to see how they pan out.

Deorwine is, presumably, a GW made up character as I have not heard of him from the books or the film. I am not too sure about him (very chunky shield aside) as we already have Gamling and Hama to represent captains of the Royal Guard. That said, Rohan is low on elite troops and heroes, so maybe he is just the ticket? This gets me to wondering whether GW will be releasing a plastic box set of Royal Guard to go with him? Now there's a thought!

These new additions to the Rohan faction throw a spanner into the works of what I have been working towards collecting so far. Apologies for repeating myself, but I will have to see how I can fit these new miniatures in and to what units I can append them. Theoden, Eowyn and Merry can all fit in wherever as they will be associated, generally, with the royal household. Elfhelm and Deorwine will prove to be a little more difficult as they will need to command a unit of troops each. As mentioned above, Deorwine could be used to head up the Royal Guard (keeps that simple) and Elfhelm can take a foot and mounted unit with some of my personally made sets of shields for identification on the battle field. Luckily, the Elfhelm set has no shield that I can see, so that will work out just fine.