Today I managed to finish the last of the seven Gripping Beast Arthurian cavalrymen I bought a few years back. He wasn't used in our battle this evening, but makes a welcome addition to our forces. 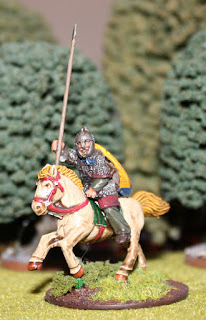 We now have 8 cavalry, 20-odd unarmoured infantry and half a dozen veteran and hero types painted up between us. We still have maybe 20 or so armoured infantry and that pack of 8 archers I bought at Salute to start on. We should have a decent sized Romano-British army when these are completed. We also did a bit of surfing to look for some enemies for them and came across some Pict minis that would go down well. I can't remember the manufacturer, but I am sure we will be able to find them again easily enough.

I was also able to put a bit more paint on the remaining Broo minis, as well as three adventurers, some Dragonewts and my first ever shop-bought figure - a 1976 Ral Partha centaur. He was my first ever Runequest character a few years later.
Posted by Little Odo at 00:06