My friend Colin was able to collect a load of his 15mm fantasy minis together that we use for our game Dark Realm and get them photographed. I have posted them below with his comments...


The goblins are mostly Tin Soldier. The two more evolved ones on the far left are AD&D. The bat (which isn't very clear) is Chariot. They come on swarms and have to be separated if you want all individual bats. Some are more easily separated off than others.

Back row (left to right)

a. Minifigs Russ commander
b. The same mage figure as described in the Magi section below
c. An Eastern commander 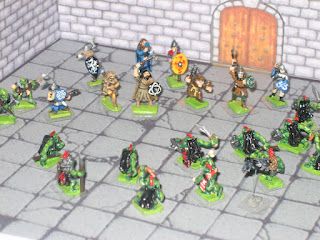 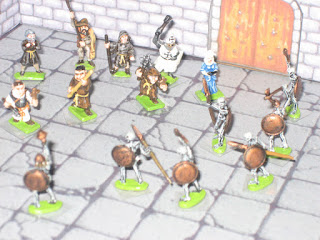 
These are all Minifigs, some being subject to more conversion than others. The Goblins are almost entirely Tin Soldier.

Back row (left to right):

a. Originally an "ancients" staff slinger, with the head removed and replaced with that of a Norman Knight and an axe blade fashioned from plastic packaging (the same as the clear bases).

b. A medieval knight with the head changed to that of a mounted Teutonic knight. It is a shame Minifigs does not do on foot figures for their mounted ones, but I have just bought 2 packs of the "personalities" and used the heads. I will do some pictures of the knights I have done so far with a mounted and foot version of each character, showing the charges on their shields.

c. A Viking archer, as manufactured. Quite a nice figure, although as it already has lots of character, it bit difficult to personalise further to make a number of different personalities.

a. A Medieval standard bearer with his banner changed for a sword.

b. Byzantian unit commander (as manufactured)

c. A Medieval unit commander with his weapon changed to a home made axe. The delicate shield design is perhaps a little incongruous with a crude axe. I may change the weapon some time in the future.

d. Another staff slinger with a Milliput gender reassignment, assisted by a bit of trimming to make a better waist. The head is of a saxon warrior from another manufacturer. The hammerhead is Milliput.

The staff slinger figure, being a rather strapping chap, is one of my favourites for converting to any large statured hero. 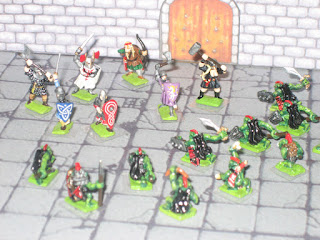 
I'm not sure where the inspiration came for this bizarre party, although their appearance has a familiar ring about it. The short chaps with the pointy ears and no shoes are Tin Soldier and the fellow (although I am not sure of what College) in grey is a Peter Pig Russian Priest without his crucifix and wearing a rather improbable Milliput hat. 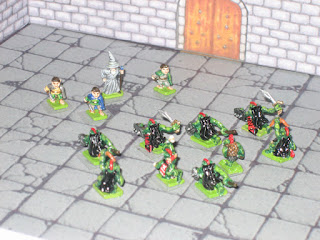 MAGES (Perhaps that should be Magi?)

The skeletons are AD&D. The Magi are of various makes and most involved a degree of conversion and adaption. The two on the right are Chariot and were painted as they came.

The back row are (left to right):

A Minfigs monk with a different Minifigs head.

A Minifigs monk with a Chariot head that has had Milliput beard and long hair added. The monk was carrying a religious emblem that has been shortened to a magic staff, tipped with a small glass bead.

A Peter Pig Russian Priest. His crucifix has been replaced with a gem from an American nails kit.

A Peter Pig Russian Priest, with a Milliput hat and elaborated beard. His staff has been tipped with a a gem from an American nails kit.

A Minifigs medieval peasant. This figure is a bit androgynous, but I have painted it to further suggest femininity, including giving her bright lips. I have also extended her weapon to a staff and added a gem from a card-art kit. The gem is a little large, but this hedge-wizard is clearly working some significant power.

The gems work very well on the table, adding a bit of "magic" sparkle. Like the gloss paint, they don't work so well in the kind of flash photos I am able to take. 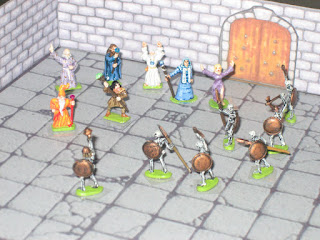 Thanks to Colin for sharing these with us. I should be getting some more of my minis up on here over the weekend, and I think Alex has a fair few minis ready for photographing too. Alex also has a trip to GW planned for tomorrow where he can get a game in with his Bretonnians and the staff will help him with painting up a small unit, maybe his Pegasus Knights. Its just down to me to get them prepared for him (cutting and glueing)!
Posted by Little Odo at 11:52