The Battle of Darkwood village

Alex and I went down to the local GW this afternoon; he had an invite to game by bringing a leader, a unit and one other thing.﻿ He was to pair up with another player against two adversaries who did the same.
Darkwood village had been suffering from night-time raids for the last few weeks. Each night one or two villagers would go missing and never return. Eventually, the nerve of the raiders grew and the raids became more daring, with attacks happening in broad daylight. The villagers saw that their enemy was an unholy alliance between skaven and ogres. The local lord, Duke Behemond, called upon his fiefdom to turn out to counter the threat, and through the magic of the local woods, the Darkwood of the village's name, the elves of the local area joined them. Battle would commence the next time the ogres and rat-men tried to raid the village.
The armies lined up as follows (bear in mind I am unfamiliar with the unit names, so only approximate labels will be given):
The Forces of Light
Bretonnia
Duke Behemond
9 Knights of the Realm (including leader, banner and musician)
16 Archers
The Elves of Darkwood
Elf mage (Level 3)
5 High Elf cavalry
12 High Elf infantry
The Forces of Darkness
The Clan Rats
Skaven mage (level 3)
2 Rat Ogres and master
20 Clan Rats
20 Clan Rats (reinforcements at Turn 4)
The Gutbuckets
Ogre Mage with large cauldron (level 3)
2 Gorgers
12 Ogres
Turn 1﻿
Everbody advanced towards the enemy their maximum moves. Nobody was in range for Magic﻿, Archery or combat. 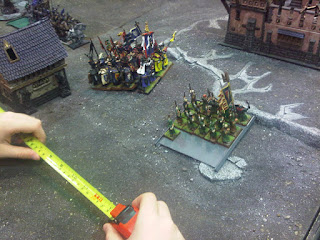 The Ogres advance into the village looking for man-flesh to satiate their hunger. The Clan rats did the same but the Gorgers were hidden in the forest but never emerged. 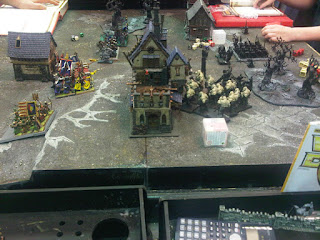 Magic was quite uneventful except the elf mage was able to cast Shield of Thorns (or something similar sounding) onto the Bretonnian Knights to bolster them for extra attacks at the end of their combat. The Elf riders were able to charge into combat. They hit the Rat Ogres and destroyed one of them. On retaliation, the Rat Ogres were able to kill two Elf riders. The Rat Ogres lost the combat and fled through the Clan Rats that were following them up, but caused no problems for them. The Elf Riders careered into the Clan Rats instead. Elsewhere, the Bretonnian Knights charged into the Ogres on their right flank. They were able to kill one Ogre and the Ogres returned the favour, but the Knights won the combat. They caused the Ogres to flee but were unable to follow up and finish them off with the Shield of Thorns extra attacks - they also stopped an inch short of the Ogres. 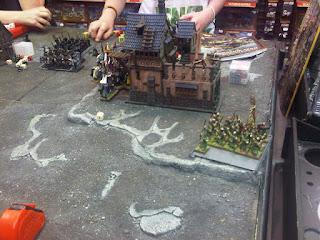 The Bretonnian archers managed to make it up the hill but realised the fight was moving away from them, so moved to the other side of the hill in order to be able to take pot-shots at any who came within range. Magic was uneventful on both sides again. The Gorgers were still stuck inside the forest. The Bretonnian Knights charged into the Ogres again, causing two to be killed, and lost two knights again in return. The Ogres turned and fled again after losing the combat but this time the Knights followed up successfully and destroyed them to an Ogre. The Clan rats duked it out with the Elf cavalry and for the loss of three rats managed to kill two elves. The Clan Rats lost the combat and fled, with the solitary Elf rider catching them and annihilating them. It was quite amazing that both the remaining Elf Rider and Bretonnian Knights rolls left them barely an inch short of following off the table and being lost to the battle! 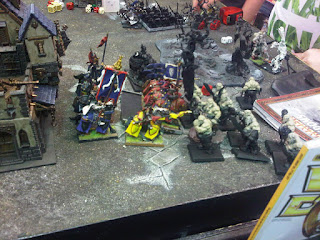 Magic was still relatively uneventful for the Good side, but the Elf Mage managed to resurrect a couple of the Elf Riders. A Clan Rat reinforcement unit emerged from the left flank and engaged the Elf Spearmen. The Bretonnian Knights saw the Ogre Mage may hit them in the rear, so did a 180 and fled back up the hill, just outside of his field of combat. The three Elf Riders were able to hit the Ogre, but he also managed to turn and face them. Unfortunately the combat was short and bloody - all three Elf Riders were destroyed. The newly arrived Clan Rats were shot at by the Bretonnian archers with one arrow clinking off the leader's armour before being engaged by the Elf spearmen and mage. The Elves managed to cause 4 casualties before being wiped off the table by being beaten in the combat and fleeing whilst being pursued. The Clan Rat mage launched some sort of Fireball at the Bretonnian archers, killing 5 in the process. They held their nerve as they were within the leadership range of the Bretonnian Lord. The gorgers, at long last, managed to leave the woods, but failed their charge rolls and barely managed to move, which was very lucky for the Bretonnian knights as they'd have almost certainly have been destroyed as it would have been a rear attack. 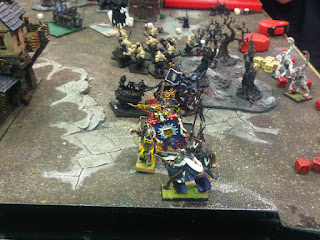 ﻿
It as at this point we had to leave the game as time had run out. The Games Workshop staff decided it was a draw as both sides had lost units; on reflection, I think the Baddies lost three units to the Goddies' two. Anyway, it doesn't really matter as it was a close game and anything could have happened. The main thing was that Alex enjoyed himself playing his first Warhammer game.
Posted by Little Odo at 19:17