A bit of a change of direction for this post today. We go from Middle Earth to post-Roman Britain for a quick visit, and an actual gaming session, albeit an RPG rather than tabletop battle game, even though we ended our session with a little skirmish.

After I was forced to stop playing my regular Wednesday 5e D&D session due to family circumstances I didn't really get to play much in the way of RPGs as I just didn't have the time available during the week to do so. Fortunately, I was able to make a few sessions to finish off the first part of the Ravenloft campaign when my eldest was temporarily back from uni for autumn half-term and Christmas. I was also able to play in another adhoc campaign with a new Ranger character run by one of the other players.

In addition to the three or four sessions of 5e D&D, I also had the opportunity to roll up and do the pre-gen preparation for a Pendragon character just before Christmas. I have played this game once or twice in the dim and distant past, but I have no recollection of how it works in practice. That all changed this evening. 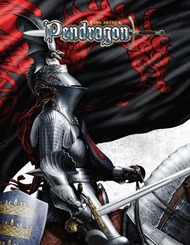 The rest of the players had had several sessions already under their collective belts, so I was a relative newbie to the campaign. Before the session I had to run through three years' of catch up (I only manged the first year - I will do the rest today) to get my character, Sir Docimedis (name taken from a fifth century listing of Romano-British names), up to date.

Here's the story of the knights' first visit to Londinium... 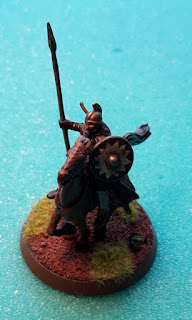 In the 488th year after the birth of our lord, at the end of the campaigning season (around September time), the freshest and youngest knights of Earl Roderick of Salisbury collected their wealth and travelled to London in order to improve their status and fighting prowess by having a new suit of reinforced mail fashioned to replace their existing coat of chain armour.

Day 1
The week long journey from Sarum ended as the small band of warriors entered the city of Londinium. The sounds and smells of the city assaulted their senses as they passed through Lud’s Gate and the numbers of unwashed denizens astounded them in their number – the city was at least ten times the size of their home town.
The streets were busy and full of throngs trying to make a living by fair means or foul. A small street urchin approached Sir Brutus and haggled for employment. Sir Brutus hired him to be a guide for a small handful of coins and was therefore able to get directions to the various inns and abodes of dignitaries within the city.
On the way to the armourer’s establishment, at which the party were to have their new suits of mail fashioned, Sir Brutus’ horse happened to step upon a discarded nail, went temporarily lame and had to be led the rest of the way around the city until it was delivered to the stables at the inn for proper care. To add to the party’s woes, Sir Godrick fell from his horse due to it being startled by a gang of street urchins darting in and out beneath its legs.
The armourer agreed to take on the job of making the mail for each of the knights but the work would take three days for the first suit to be completed and then the other suits fashioned on subsequent days, meaning that the band of warriors would need to keep themselves entertained in the big city for around a week.
The knights paid the armourer for the job he was about to do for them and then headed towards The King’s Arms inn, close to the basilica, where they stabled their horses and settled in for the evening. A few drinks in the common room loosened tongues and the rumour that the self-styled Anglo-Saxon king Aethelfrith had increased his raiding upon Londinium was uncovered. After his latest successes in Essex and Kent he was obviously emboldened to push deeper into British territory.

Day 2
The following day, the streets were noticeably quieter. Sir Godrick bought a fabulous jewel for his intended and Sir Errol a love poem for his bride to be. Unfortunately, a mangy stray dog put paid to Sir Errol’s perfect day by savaging his best riding cloak. The evening was spent in the slums that made up Southwark on the other side of the Roman bridge. Bear baiting and cock fighting were the order of the evening with varying success or failure for each knight on the gambling front, but all woes were forgotten when upon returning to the inn the rest of the evening was spent at a knight’s wedding feast.

Day 3
After a long rest at the inn, the band of warriors walked to the White Tower to see whether it would be worthwhile staying there, but rumours of a mustering for war soon put paid to their presenting themselves to the lord as they did not want to be sent out on raids before their new armour was ready. Instead, they introduced themselves to a grizzled veteran of the lord’s retinue and challenged him and his best knights to a tourney – best of three strikes. All of the errant knights proved themselves worthy and won a small amount of glory for their troubles and bruises.
The evening was spent watching a few fist-fights at the Axe Head tavern after Sir Errol had collected his new armour. Again, monies were lost and gained on the outcome of each fight.

Day 4
Whilst the knights wandered the streets to collect Sir Godrick’s new armour he got splashed with the contents of a pail of night soil. This put a sombre mood onto the young lord but it didn’t spoil his enjoyment of the play that the knights went to see that evening. Sir Docimedis must have eaten or drunk something untoward as he was ill for the rest of the evening and most of the following day.

Day 5
It took a while for Sir Docimedis to recover from whatever had upset his stomach, but nothing would have stopped him from picking up his new suit of mail. To celebrate three of the knights gaining their new armour, the party headed out for a night of gambling, again with mixed fortunes. Sir Errol had been ahead all night only to lose it all and more on the last throw of the dice.

Day 6
The entertainments in Londinium were wonders without cease for the errant band of warriors. They had seen a variety of the best on offer in the city but it all paled into insignificance against the spectacle of four bandits being executed for robbery. Gambling was again the order of the day as the knights bet upon how many strokes the executioner’s axe would take to separate the miscreants’ heads from their bodies. The axeman was on form that day and a couple of the knights made a tidy sum on the outcome.
To make up for their ungodliness during their stay in the city so far, the band of warriors paid penance in one of the many churches that dotted the city. After feeling shrived of all their sins, Sir Lleddren collected his armour from the smith.

Day 7
After the festivities of the week, the party decided to take things a lot more quietly this final day and did not pursue any of the remaining delights of the city. Sir Brutus, due to his huge size, was the last to have his armour completed, so the party waited until the allotted time to go collect it. Upon returning to the inn they were once again accosted by the knight who had married and passed another evening drinking and merry making.

Day 8
Now that all of the armour had been made and collected Sir Brutus suggested that the party go hunting for Saxon raiders. Sir Errol, the best tracker, was able to spot two small bands of raiders (one of nine men with a leader and another of six men) and Sir Godrick, the best tactician, was able to set up a spot for an ambush for the nine-man band. The six-man band was left for some of the White Tower’s retinue to take care of.
Within a few moments of clashing, Sir Brutus had downed the leader with a near fatal blow and the Saxons facing Sir Errol and Sir Lleddren were knocked off their feet. The warriors facing Sir Godrick and Sir Docimedis took minor wounds.
The Saxons rallied after the initial clash and felling of their leader. Those knocked to the ground got back onto their feet but were almost instantaneously killed by Sir Brutus, Sir Lleddren and Sir Errol. Sir Godrick and Sir Docimedis decided to draw their swords but this was the undoing of Sir Docimedis as he was hit by a spear and unhorsed.
Sir Brutus, Sir Errol and Sir Godrick killed their opponents both on foot and prone and came to the rescue of their brother Docimedis before he could be injured further.
Sir Docimedis’ wounds were tended and the Anglo-Saxon leader was returned to London for ransoming. The party made good money on the raid, but Sir Docimedis would be sore for a long while afterwards.

Next week should see the resumption and finishing off of the preparation of the rest of the Lord of the Rings figures in my collection. There are not too many to go now, so hopefully all should go well. After the game last night, and seeing how my friends painted their miniatures (much brighter and nicer than the drab colours I used for my Riders of Rohan), I will take another look at my Arthurian collection to see what they can be used for - perhaps future games of Pendragon if I am able to host at my house, or maybe as denizens of Middle Earth who are not attached to any particular faction I have collected? It is amazing how an enjoyable game can change one's perception and outlook on the hobby. My creative juices are flowing and my imagination is back in action again.