Due to my eldest being back from uni and the rest of the nippers being down at their mum's for Easter I had an evening free for a bit of gaming. D&D and Pendragon were not for various reasons (lack of prep time and the Pendragon GM being on holiday), so a boardgame was suggested. There would be five of us at CB's house this evening for a bit of gaming, so up stepped Heroquest - perfect! 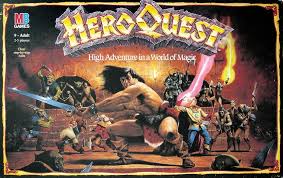 I played a few board games of this ilk many moons ago, but upon playng Heroquest last night I don't think that this was one of those games - either that or my memory is very hazy. To win at tonight's game we just had to collect the most amount of Gold in comparison to our co-adventurers but act in a co-operative manner or we would all wind up dead and the DM would win by default.

As it was his game, and he was therefore most familiar with it, JD played the evil necromancer (Morcar?) and had readied a full dungeon, on two levels, for us to explore. At the end of level one we would get a reset for our wounds and spells etc. We were also allowed to die and come back the following round fully replenished (with half treasure), but if there were four party deaths in total, the GM would "win" the game. So, with this in mind we randomly selected our characters...

I won't go into all the details of each room as they played out as I basically got so drawn into the game that those considerations went out of the window within a few moves.

We advanced down the stairs into the dungeon and began to work our way through it looking for the library that would provide the portal to the second level and hopefully a final encounter with the necromancer. We opened doors, fought monsters, relieved them of their treasure and looked for traps (often far too late and therefore suffered the consequences) and secret doors.

Due to bringing up the rear of the party I surged ahead in the acquisition of Gold but my co-delvers figured things out quickly and remembered that they needed to acquire Gold too in order to win, so there were a few hilarious races to grab treasure that involved using potions and spells of Speed.

Unfortunately, our doughty dwarf was lost twice and my wizard once but we finally met the necromancer and defeated him. Due to finding some fantastic armour and weapons for our barbarian and elf characters we quickly settled into a routine for clearing out our adversaries in double-quick time. However, right on the stroke of home time we finished the adventure and totted up our treasures. The barbarian won hands down, followed by the elf, my wizard and then the dwarf - it ceratinly didn't pay to get killed in this game, which just went to reinforce the point that this needed to be treated as a co-op adventure. Luckily, we avoided four character deaths so all of our hard work was not taken away from us by a victory for the DM.

For an evening's entertainment, this was a great little game. It took a wee bit of prep for the DM to set up, but I imagine there must have been some way of running it without a DM and thus each room being rolled for randomly when the doors were kicked open. I would definitely play it again now that I am more familiar with the mechanics, and would like to try out each of the other characters to see how they played. I found myself hoarding my magic for as long as possible to use in the final encounter with the necromancer, much to the chagrin of a couple of the other players, but a couple of spells I did keep back proved to be very useful indeed.