Games Workshop Goblins for Hordes of the Things

These are the other figures I managed to complete this morning... 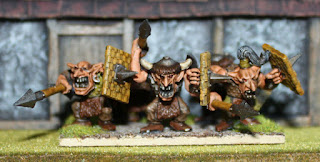 They are two units of Goblin Spears. As mentioned in a previous post, I make my bases slightly deeper (but proper frontage - 60mm) than standard as I want them to convey the appearance of lots of warriors as befits the title Hordes of the Things. For standard units of Blades and Spear I put five figures on each base.

The figures themselves are from Games Workshop, from their plastic Warhammer range. I am not too keen on their comical faces, but I think I have toned them down enough by not doing them in the standard green that GW paint them. They are actually quite large compared to the Harboth's Black Mountain Boys I painted a while back, but still fit in with the rest of the emerging 24 point army. I think I will have to go down the Tolkien road and say that the terms 'Goblin' and 'Orc' are interchangeable for the same 'race' of beings.

I still have three bases of goblin archers to glue up to add to the army, as well as a box of Night Goblins, which I will probably use as hordes. I am hoping to get these ready by the summer so I can fight them against the Barbarian army completed last year. I still have loads of old Citadel Night Goblins too, but I am not sure whether to use them on HotT bases or as individually mounted foes for fantasy RPG.

Next up (but it will be quite a while) should be loads of Norman milites, and Alex has a stack of Elves from a variety of manufacturers on the go for his own HotT army and LotR SBG.