A filler to be getting on with until I can get some painted mini﻿atures up on the blog. Here is the 17th Campaign turn summary for Doggerland. 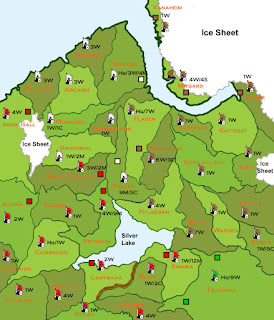 ﻿
The great battle of Dogger was more than a contest of swords and spears, it was also a battle of the sharpest of tongues. All the great warlords of the land puffed and preened themselves in front of their warriors, but which of them held the loyalty of their men most steadfast? Was it the lord Bjarni with his glorious rise from raider to war chief and promises of more to come? Was it the divinely praised lord Elrich who would hold his men with belief in his greatness and the future prosperity of the Land? Or, was it the lord Bran; slayer of men and builder of castles?