I have finally got my next foray into play-by-email under way. Doggerland is a fictitious prehistoric northern european strategy battle game. It is based on the antediluvian region that is now beneath the North Sea named by many underwater archaeologists as Doggerland. 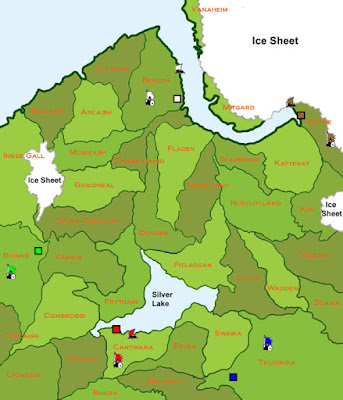 I have five players involved in this game, so it should make for a great campaign. Whilst this is running, I will be attempting to build the armies in 15mm and then running the battles on the tabletop using Hordes of the Things rules - one warband in the game, representing one warband on the tabletop.

I am due to go to Colours next weekend, so I will be paying a visit to the 15mm manufacturers' stands to see if I can buy 5 different armies to represent the player territories in the game. I have some Dark Age minis already that I can use to represent the non-player territories. To begin with I'll only need about 30-odd minis per army. I just hope that the ranges I buy from aren't discontinued as the game progresses and I need to add to them!

Painting wise, I achieved a big fat zero this week, but I am still waiting on that spray varnish through the post.

Tabletop gaming wise, I may have a new gaming buddy whom I met at my last outing to KAFS. He is interested in playing WAB and in collecting Romans and Celts, of which I also have a small collection growing. It is always nice to meet new players and play against new opponents who play in different ways to one's existing opponents.
Posted by Little Odo at 19:38