I put a bit of paint onto some figures this weekend. The rain meant things were a bit dark in my painting area, even with the lights on, but I decided to just complete a few figures that were almost there and do some easy stuff that didn't rely on fine focusing.

I managed to complete the four Dark Judges from 2000AD (Citadel minis from the 80s - I like the new Mongoose ones too, but they are scaled differently and will not be compatible with these minis, so I may buy them and use them for the new Judge Dredd game, but leave these on the shelf as reminders of good times past)... 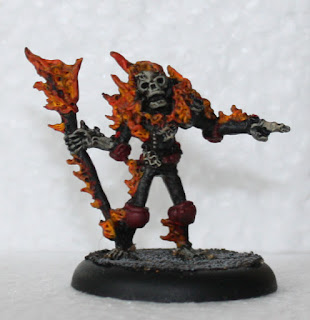 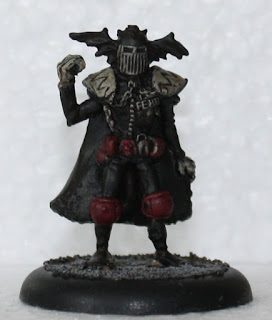 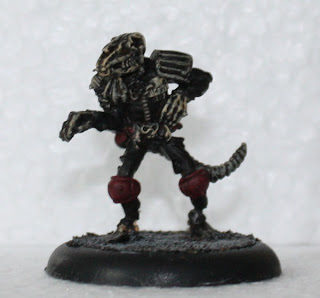 and finally, the meanest of them all ... Judge Death 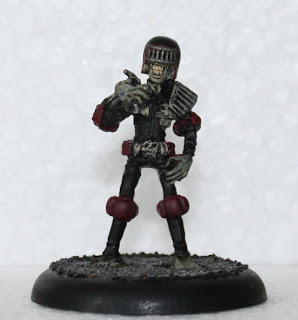 I have actually just been reading some old 2000ADs and Megazines and what prompted me to get onto these figures was the story about Young Death in the Megazine.

All went well with the painting of the figures but I had a bit of a mishap on Saturday. I managed to get my paint tray a bit wonky when I moved it and a whole slew of figures slid off and hit the floor. Judge Mortis got broken off at the ankles but I was able to manage a minor repair - not brilliant but at least it is not as bad as a couple of my Norman Knights - the horses' legs got snapped off at the fetlocks, but are unfortunately completely beyond repair. A few other minis got away with just minor damage (spears snapped off etc., but they have all been repaired OK). In all my years of gaming and painting these are the first three that I have ever broken by dropping them. When I hear some of the horror stories on the net of people losing entire armies to mishap I feel I have had it pretty good so far.

I managed to get the rest of the Norman knights I have been talking about recently fully undercoated this weekend, so I will start painting them proper soon. I was thinking of trying to do a knight a day, but the original title of the venture now has to fall by the wayside - I can no longer call it "40 Days 'n 40 Knights" as I now only have 38 of them left! :-( I may try to put an order in for a few more to make up the numbers, but then again might wait until I get my infantry side of the army sorted. This would mean a bit of a delay in getting them painted. I am going to use these Normans for skirmish gaming, so all are based on round washers. I have yet to find them an enemy to fight. I have a couple of boxes each of Gripping Beast Vikings and Anglo-Saxons. The Vikings would work well, but unless I called the Normans something else they are not early enough to go with the Saxons as they seem to be Alfredian.