I managed to finish up a few fantasy figures that were lingering on my paint station today.

First up is a second Josef Bugman. The first one is on a stand of Dwarfs for HotT that I made up a while back. Thi sone I gave a slightly different colour scheme; more blues than greens. 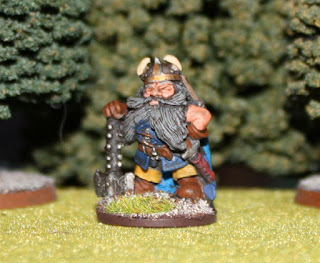 Next up is a not-Conan from Heroes of the Dark Ages. A friendly little company that produces some very nice one-offs that can be used in all sorts of situations. I have already used some of their stuff as a stand of barbarians for HotT. 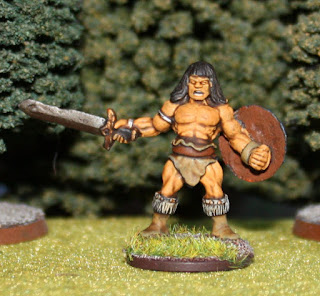 Finally, here are a brace of Citadel Demons. The red one doesn't seem to have come out too well in the flash, and is more subtly shaded than the photo shows. These are actually quite small and could be used in either 28mm or 15mm scale gaming.

Next up should be a few more villagers courtesy of Warlord Games and the rest of those Lesser Goblins/Svarts. I have also started to put paint to lead on those Splintered Light Druids Children minis, but after having seen Dunc's latest pics of his, I think I may just not bother as his are so good - are you sure you are not 15mm tall yourself Dunc and are painting them 1:1 size? I just cannot see the detail you are seeing let alone being able to paint it! I also have some more Brytenwalda troops, a handful of fantasy minis and some Nick Lund's Chronicle Kobolds (I love these ranges - I have some of his chunky Hobgoblins to prep soon too) from the early 80s about to see the undercoating spray can - provided the rain holds off.
Posted by Little Odo at 15:33