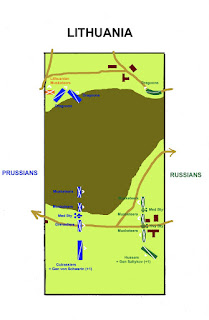 As part of a general westward push, a Russian army under General Peter Saltykov invaded Lithuania. Despite being a Polish territory, the King of Poland (the Duke of Saxony) took no action. The King of Prussia however anticipated the invasion and sent an army under General Count Kurt Christoph von Schwerin to support the small Lithuanian army. The two armies met and deployed for battle.

Russians on the right, Prussians & Lithuanian allies on the left.

Both supply roads the bottom most roads.

To the north of the hill a road ran from east to west. Almost at the east end of the road was a village.

To the south of the hill, also running from east to west was another road, along which both armies traced their lines of supply. At the east end of the road was a village. At the west end was the large house of a Polish noble.

The Russians approached from the East.

As the armies caught sight of each other the Russian dragoons were riding in column along the northern-most road, east of the village. To the south of the hill the infantry and artillery had drawn themselves up just in front of the village. The hussars, led by Saltykov in person, had drawn themselves up on the infantry brigade’s left flank, facing southwest.

The Prussian dragoons had drawn themselves in one brigade opposite the Russian Dragoons, with the Lithuanian musketeers behind them.

The Prussian grenadiers were drawn up in line on the southern-most road. To their left were the rest of the Prussian infantry & the artillery. To their right were the Prussian cuirassiers, personally led by General von Schwerin.

Both armies advanced, the Russian dragoons in the north taking the village ahead of them and forming up in line at on the other side. The Prussian dragoons formed up side by side and then charged, unfortunately colliding with each other and grinding to a confused halt before reaching their objective. The Russian dragoons had by this time however already turned tail and fled to the east side of the village.

Meanwhile to the south, the Russian heavy artillery had started pounding the Prussian grenadiers, who stood firm.

As the pounding in the south continued, the Prussian dragoons managed to untangle themselves (amid multiple recriminations and arrangements of duels) and advance to through the village in line, one regiment behind the other. They then charged the disorganised Russian Dragoons, whom this time held their ground long enough for the Prussians to carve into them. After a brief fight the Russian dragoons fled the field with one regiment of Prussian dragoons hot on their heels.

To the south the Prussian infantry withdrew out of range of the Russian guns, which were promptly turned onto the cuirassiers. A relatively few number of Prussian cavalrymen fell. Those that did however included General von Schwerin himself, truncated by a 12lb ball of solid iron. His horse, obviously startled, fled the field, carrying the headless body and the general’s alarmed staff with it. Seeing this, Saltykov, at the head of his hussars, gave the order to charge. The Prussian cuirassiers, left out on a limb without the support of their general and faced with the charging Russians, fell into confusion as officers and sergeants struggled to keep the men from fleeing. The Prussian cuirassiers faced the Russian hussars standing. They fared poorly in the ensuing melee and left the field in a broken state.

The Russian hussars then faced the musketry of the Prussian grenadiers before being able to advance to safety and moving to threaten the Prussian lines of supply. Meanwhile to the north, the remaining regiment of Prussian Dragoons was racing south to cut the Russian’s own supply road. Time was however against them both and darkness fell.

The battle was a draw.

The Prussians (having mounted a defensive invasion) withdrew to East Prussia having lost a general & 1 SP. A new +1 general will appear in Prussia next turn.

As the Lithuanians survived unscathed, Lithuania & Russia co-occupy Lithuania. Russia has gained no victory points and has lost 1 SP.
Posted by Little Odo at 11:55