My gaming buddy Colin sent me through some snaps of a game he had with a few of our other friends a little while back. I have played with these armies previously for tabletop battles within the game 'Sport of Kings'.﻿ It has been a while since I have played this game, but these shots brought back some memories. Comments by Colin...
This first photo shows the advancing Prussian Infantry, with the banners being hand painted. The house is Hardcover (printed card). The roads are strips of corduroy, ridged side down - easy to cut accurately and grips to the field enough to stay in place.

These are Prussian Dragoons.

This photo shows a melee between Prussian Cuirassiers (in the foreground) with the Russian Yellow Hussars, directed by a Russian General (I recall we decided it was Peter Saltykov - don't try to look for a silly pun, it was the name of a Russian General).

Here is a picture of a Russian Infantry Brigade advancing. It shows a close up of two regiments of Russian infantry with an artillery battery and another infantry regiment in the background. The standard is made from the metal base of a Mr Kipling cake, a bit of wire and some Milliput to make the finial. The design was hand painted. 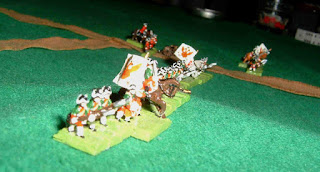 The final photo is of mostly Heroics & Ros Prussians painted as British. The Mounted officers are actually Austrian Dragoons (carbines removed). The drummers are converted from Prussian pioneers with their mitres shortened and a drum made out of Milliput.

All flags are hand painted

The Highland regiment and the General are Irregular miniatures.

All are painted in gloss enamel for durability and to give that traditional "toy soldier" look. I know I am in a minority, but I like them that way, hence also the lack of individualisation of the soldiers. I do usually however use variations in pose etc to indicate "irregular" units.


These minis make for an interesting diversion from my usual Dark Age/Fantasy figures. Colin and the rest of our gaming group, have played many games over the years, mostly home-grown or heavy modifications of commercial rules.
Posted by Little Odo at 22:56