Well, not cavalry exactly, but the heavy mob when all else has failed. These are the troopers that are called in when the going gets tough. Armed with heavy-duty plasma weapons and state of the art power-armour these guys are the 'cleaners'. They are some of the first of Citadel's Space Marines released way back in the early 80s - I still have about another half-dozen or so to clean-up and paint. I have painted them to fit in with my vision of a futuristic Justice Department that encompasses the law and war. 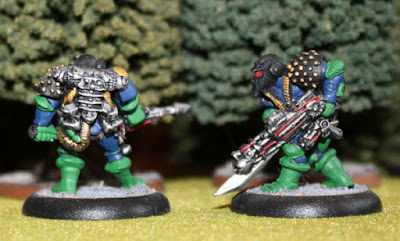 Here's another view of the same troopers - the view you never want to see when they are angry! 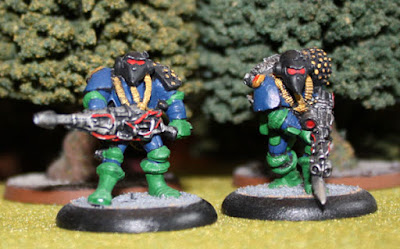 I had a good sort out and tidy up of my paint station today, so got a lot of those little hang-over things finished up. There are still quite a few minis in a half painted state that should hit the site in the next few weeks: Celts, Riders of Rohan, RPG Fighters, HotT barbarians and many more.
Posted by Little Odo at 21:02