We started a new mini-campaign at the RP Haven last night. Our Pathfinder DM has gone on holiday for four weeks, so we needed something to fill in for those sessions he is absent. Our ranger said that he would run a game from the early 80s called Dragon Warriors. He sent out the character creation rules, we rolled up our characters and started a new adventure in a land that resembles medieval Europe around the 11/1200s (except for the fay magic).

A picture of the cover of the 2008 updated version of the game... 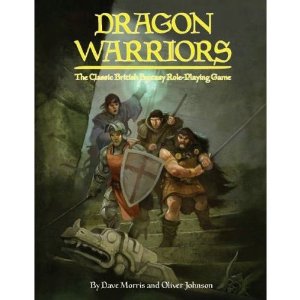 The campaign world put me in mind of a couple of books on Anglo-Saxon magic I read many years ago; The Way of Wyrd by Brian Bates and its follow up The Real Middle Earth. Giving these books a swift re-read will be on my agenda in the coming weeks, especially when I heard that the former has become available for the Kindle reader.

Session 1: A Kidnapping in Worsted ()


Aethefrith, a huscarl from Thuland, downed his mead in one gulp after winning his bet against the effete Sir Geoffrey. He placed his prize, an amulet made of silver, into his pouch and began to rise from the mead bench. He did not make it very far, and slumped back onto the bench, his head swimming.


The next second he awoke, standing on the edge of a small stone pool with a battle raging all around him. Naturally he reached for his spear and shield but they were gone. He also noticed that his usual chain hauberk and woollen tunic and trews had been replaced by a monk’s habit. At least the amulet he had won in his bet was still there, but was now hanging around his neck.


At that moment a huge roar went up from a gigantic cat. It was chasing a score of ill-demeaned armed men out of the village in which Aethelfrith had just appeared. Ahead of Aethelfrith were a well-dressed noble-looking man, and two men dressed similarly in monk’s attire; one slight and shifty, the other haughty and imperious looking. Behind him was a crowd of nervous looking villagers armed with a variety of pitchforks and wheat flails.


After taking stock of his immediate surroundings and realising there was not much to threaten him except for the huge feline, he yelled for his arms and armour, boasting of what he would do to whoever it was that had stolen them from him. The cat had by now chased the bandits from the village; several corpses littered the way along the road leading south. The peasants behind him were still cowering wondering what to do, whilst the rich-looking man beckoned him and the two other men dressed as he was to the nearby tavern. Suspecting a trick, the two large men, Aethelfrith and Sir Erich of Barton, looked around for ways in which to arm themselves. The third person in monk’s robes somehow seemed to be perpetually half-hidden. The two warriors managed to strip some of the corpses of some of their weapons and a little leather armour. The villagers took their cue and began to do the same but only when the new arrivals had taken what they needed and vacated the area. The accumulation of weapons calmed the two warriors’ edginess, so they agreed to follow the stranger into the tavern.


The noble grabbed a table and ordered drinks for them all. He then proceeded to answer their questions. There was not a lot he could tell them other than he had come into town with the Rievers, had fulfilled his role and was now at liberty to do what he wished. When asked what his role was, he replied that he had resurrected the three of them from being held as stone statues around the pool at the temple. Sir Erich enquired as to the date, and they found out that they had been statues for several years (Aethelfrith for nine years, the other two for five)! Luckily none of them had aged any since the moment they were abducted.


During this conversation, the villagers and cottars had realised that the new comers were not a threat to their safety and their nervousness had dissipated to be replaced by curiosity as the tale of their rescuers unfurled. Throughout the conversation the nobleman tried to divest the warriors of their amulets. He almost managed to get Aethelfrith’s but would not stump up his sword as collateral. The three of them realised that their amulets were special, most likely linked to why they were brought to Worsted, and were different only in the writing on the back of them which none of them, the noble included, could read. The three companions in fate decided they would not part with their amulets and the nobleman left them in a huff, after narrowly avoiding fisticuffs with Aethelfrith, to book a room from the tavern keeper.


After the noble had gone, the three began to talk to the villagers. They found out that the church they appeared by was built by the brothers of the order in whose likeness they were dressed (in fact they had been summoned to life from the statues that surrounded the pool), but this was only remembered by the eldest of the townsfolk from their youth. No priests were present anymore, but the church was well-maintained they admitted.


The newly arrived warriors decided amongst themselves that they would help out the villagers in getting their mayor back, but would need to be suitably armed and armoured. Unfortunately none of them had much money, except the few coins they had scavenged from the bandits’ bodies when they collected their weapons. The villagers suggested that they paid a visit on the Beckett’s, who could supply many of their needs without an up front payment!


The three companions decided to see what they could get and headed down the lane to the store. They were confronted by a middle-aged man and two young adults sweeping the already tidy floor, who stared at them as they entered. The party ordered up what they could from the store keeper and were bound over to pay for the equipment within a month or lose the amulets that they had handed over as collateral. Aethelfrith grabbed a spear, shield and some travelling clothes, whilst Sir Erich and the Silent Man grabbed what they required from the store man’s stocks.


Realising that they had now had to earn their honour, they headed to the temple to look for some clues. They found nothing important in the temple other than it was well-kept, had a couple of rows of about four sets of fine quality wooden pews and there was a linen altar cloth also of reasonable quality on the altar itself. The stained glass windows showed some money and effort was spent on raising the building, as well as the fact it was only one of three all-stone buildings in the village (the rest only had stone foundations).


As there were only a few hours of light left, the party decided not to set out on the trail of the Rievers to rescue the mayor yet, as the trail of dead bodies should prove easy to follow when they picked up the trail the next morning.


The small band of warriors set out at first light and followed the trail into the forest. It was easy to follow to begin with, but after a while the signs became more confusing and Sir Erich finally lost his way later in the day. Aethelfrith used his forest craft to forage for their food whilst Sir Erich tried to pick up the trail again.


Towards the end of the first day, Aethelfrith came across a bush laden with fat, juicy berries; more than enough to feed them all that evening. As he bent down to pick the first clutch of succulent fruit, the bush struck out at him. He managed to dodge back quickly enough but his returned spear lunge was also somehow avoided by this animated bush. Sir Erich thrust his spear at the daemon-possessed plant but an arrow from the Silent Man’s bow flew wide. Aethelfrith moved back in and dispatched the possessed shrubbery with his spear.


For seven days the party quartered the land looking for the trail but they failed to find any sign of it. The only other beings they encountered were faerie creatures which arrived during the night whilst they all slept or otherwise did not notice, caused a bit of mischief by tying bootlaces together and generally rearranging everyone’s belongings. Running out of luck and wishing to rest up for a bit, they returned to the village to report their findings to the villagers.


After a good night’s sleep and a hearty meal, the party headed out into the wilderness again to try to pick up the trail of the Rievers. It had gone cold, so rather than head for the forest they had already explored they decided to go into the hills.


That very same evening, Sir Erich was on watch when he heard some snuffling noises. He awoke his companions and they all crept towards the source of the noise. They found that it emanated from a very large musk ox and his small herd. Aethelfrith had hunted these creatures in the past and realised that the beasts were too strong for the party to take down with their current weapon haul. They would go without meat for a short while longer.


After a few more days of having no luck in the hills, they decided to head back into the forest at a point they had not been to before.


They had only been searching for the trail for a few hours when their senses were assaulted by a strong carrion smell. They followed the scent and found that their way opened onto a small glade. In the centre of the glade were two bodies surrounded by a pack of ravenous wolves. Upon noticing the party, the matriarch called them together to face their human adversaries, but she did not have the nerve to charge at the newcomers as men were known to be dangerous foes.


Sir Erich and the Silent Man loaded their bows and shot at the wolf pack. One of the arrows flew true and struck the matriarch. She howled in rage and the rest of the pack joined her in attacking the humans.


Sir Erich still needed to ready his spear and even though Aethelfrith desperately tried to protect them both with his shield, they were both badly bitten by the raging wolves. The Silent Man had moved off into the surrounding trees and let off another arrow that struck one of the wolves. A couple stopped their attacks against the two stalwart warriors and ran towards the other assailant who had separated from the human pack.


The reduction in numbers allowed Aethelfrith to quickly kill the matriarch with his spear and Sir Erich managed to wound one too, but not before each of the companions was bitten again. A final surge of fury and a cry to his war-gods had Aethelfrith spit another wolf on his mighty ash shaft. With two of their number down, and several wounded, the wolves called it a day and ran off.


The party approached the bodies in the centre of the clearing only to find that the bodies were not fresh kills but had most likely been killed several days before when their quarry had originally passed through. They were back on the trail, but sorely hurt.
Posted by Little Odo at 18:55