The Rohan project is coming along nicely, more on that in a later post, but before paint actually goes onto the Riders, I have dozens of others that need to be finished in the meantime.

Here is the first - a witch of the element Water. Apologies again as it should be classed as an X-rated mini. The mini is an old Ral Partha one from their Personalities and Things That Go Bump in the Night range. The wash went on a little funny, for some reason, resulting in an odd stain. 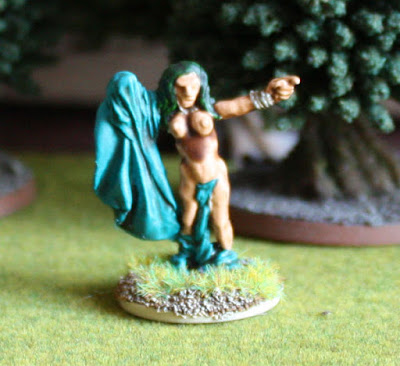 The second witch commands the element of Air. I think she is from the Citadel Fantasy Adventurer range of minis. 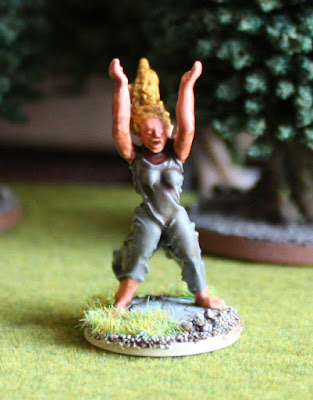 The next two are wizards of the element of Earth. The first is actually a Citadel Druid mini. His scythe broke off eons ago, so I replaced it with a spear. The second figure comes from a small company, Warband I think they were called, that was only around for a few years. She also lost her wand over the years, and again I replaced it with a wire spear. 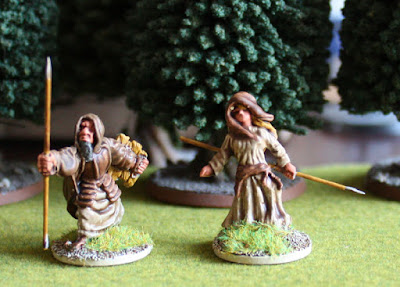 Finally, here are a couple of wizards of the Void. The lady on the left is a Ral Partha mini, and I think the wizard is a Citadel mini. 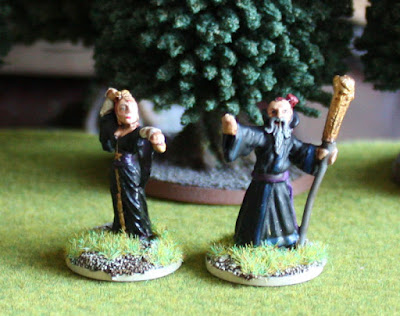 The picture below shows the whole ensemble. I have now completed pretty much all of my wizardly types. I think there are a couple of mounted wizards still to come and a few of Warlord Games' Celtic druids, but these won't be painted for a while, and probably in conjunction with other Celts.

Whilst I shall be concentrating on getting my Rohan minis ready for painting over the coming days, there are still quite a few other minis that are half done that will be posted up over the coming weeks. There are those Roman auxiliary spearmen, a couple of demons and one or two others that need a final lick of paint.
Posted by Little Odo at 16:23